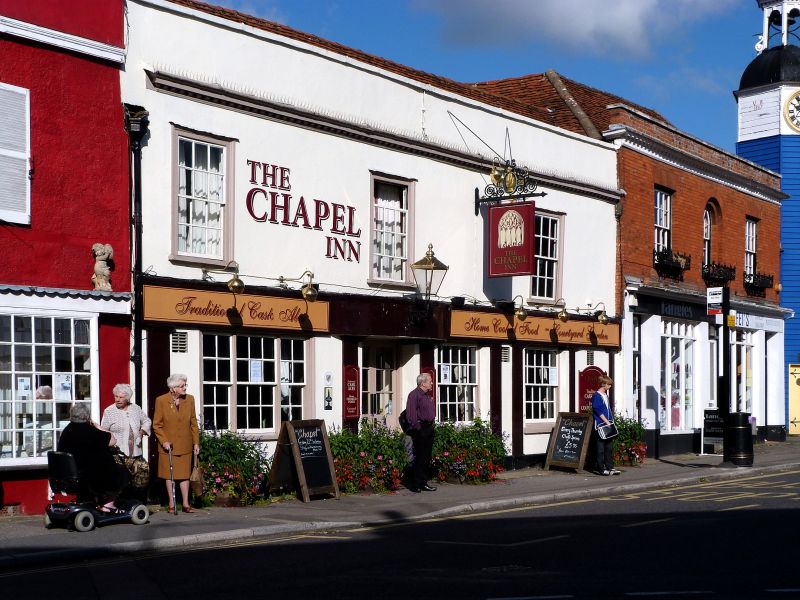 House, now hotel. Late C14, altered in C16, C18 and C19. Timber framed,
plastered, roofed with handmade red plain tiles. 2-bay hall facing E, and 2-bay
crosswing to left, with C19 internal stack to left. C16/17 2-bay wing to rear
of hall, with internal stack at the junction. 3-bay extension beyond, early
C17. To right, early/mid C19 wing of red brick in Flemish bond with slate roof.
2 storeys, cellars and attics. Ground floor, one early C19 tripartite sash of
8-12-8 lights and 2 early C19 sashes of 10+10 lights. First floor, 3 early C19
sashes of 12 lights. C19 double half-glazed doors. 7 plaster pilasters.
Plaster band at first-floor level. Moulded and dentilled cornice, plain
parapet, hipped roof. The crosswing has an underbuilt jetty, jetty plate
missing, a heavy binding beam chamfered in 2 orders, and one of 2 plain braces
to it, 0.14 metre wide (and one C20 replica); joists of heavy square section,
jointed to binding beam with central tenons with housed soffits. On the soffits
of some joists are traces of floral paintings, c.1600, covered by brown varnish.
Roof rebuilt in line with that of main range. The hall has an inserted floor of
c.1600, comprising a chamfered axial beam and plain joists of square section,
and a dado of oak panelling, c.1600. Most of the frame is covered by internal
finishes, but sufficient of it is visible to establish that the original
building is substantially present and structurally unaltered. The partition
wall between the hall and crosswing is smoke-blackened at roof level. Roof
structure not accessible. Early C19 stair with turned newels, wreathed mahogany
handrail, and stick balusters. The rear wing has on the ground floor an early
C19 horizontal sash of 12+12 lights, and on the first floor a similar sash of
9+9 lights; chamfered binding beam and plain joists of vertical section. The
extension beyond has jowled posts, chamfered axial beams with lamb's tongue
stops, and an introduced bow window of uncertain date. The right wing has at
the rear 2 original sashes of 12 lights. Probably the house of John Sewall,
Sherriff of Essex in 1381, and later known as Ayworth's or Edgeworth's (G.F.
Beaumont, A History of Coggeshall in Essex, 1890, 231). RCHM 50.