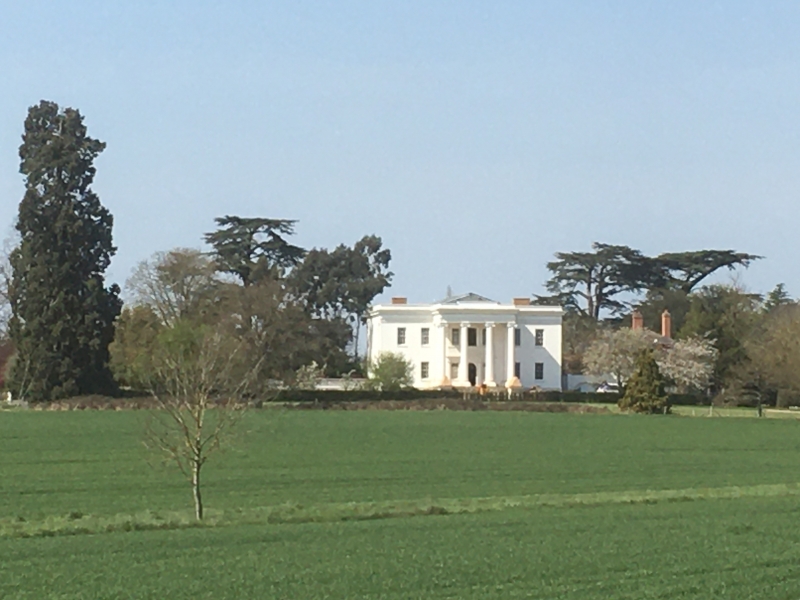 Mansion. C18, reduced in size in 1939, severely damaged by fire in 1940. Red
brick in Flemish bond, formerly stuccoed, now mainly exposed, unroofed.
Rectangular range facing SE. 2 storeys and basement. SE elevation, 2:3:2
window range of open apertures. Large tetrastyle Ionic portico and 10 stone
steps. Open entrance with 2 engaged columns and 2 pilasters, entablature and
pediment. Above it, 3 window apertures divided by engaged Ionic columns, and 2
pilasters. NW (garden) elevation, ground floor, 3 sashes of 6 lights and 2
blocked apertures. First floor, 2:5:2 window range of open apertures; the
middle window has stone jambs and semi-circular head. Blocked central doorway
with stone doorcase and shallow canopy. 2 engaged giant columns, 2 giant
pilasters, and pediment with blank panel. 6 plain stone steps and 2
semi-circular stone steps with moulded lips. One blocked basement window
aperture to each side of steps. Walls extend to left and right, representing
the basement storey of the wings demolished in 1939, each with 2 blocked window
apertures and a plain stone band. Part of the ground floor and basement at the
NE end are occupied as a house, with a flat roof. Built c.1715 for Sir Anthony
Abdy, enlarged c.1750 for Charles Callis Western. Wings demolished in 1939 by
Geoffrey Houghton Brown (B.L. Kentish, Kelvedon and its Antiquities, 1974,
28-30; Plate 1 is a photograph taken in 1865 from the E). Other photographs
taken c.1865 from the E and NW are reproduced in Simon Houfe, 'A Household
Preserved', Country Life, 27 May 1976, 1430. An engraving of the house from the
E in 1832 is reproduced in Virtue's Picturesque Beauties of Great Britain, 1833,
56.