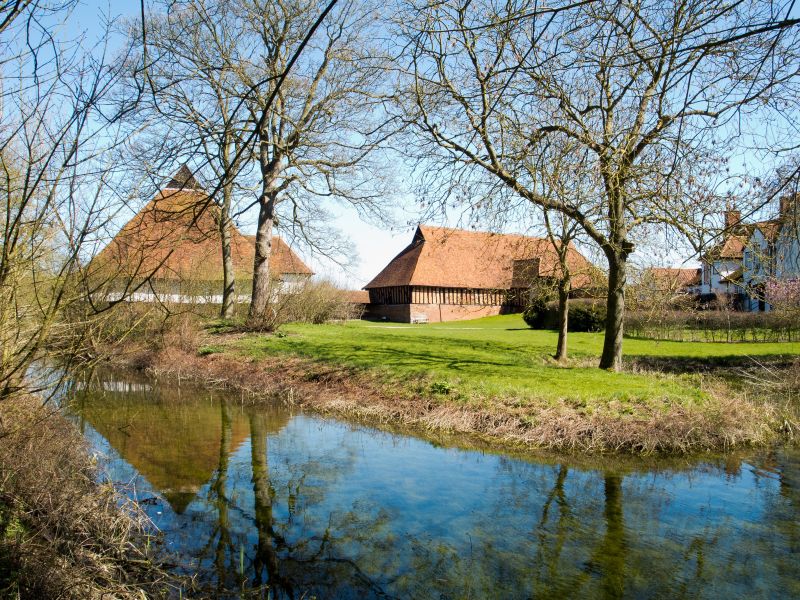 Barn. Early C13, altered in early C16 and C17. Timber framed, plastered and
weatherboarded, roofed with handmade red plain tiles, plinth of red brick in
irregular bond. 7 bays aligned NE-SW, with 2 aisles and midstrey to SE. 38
metres long, 14 metres wide, 15 metres high. The SE elevation has great doors,
4 plain loading doors and one small light with diagonal leading. The NE end has
C20 double doors and one slatted vent to each side. The NW elevation has great
doors and scattered C20 fenestration. Gablet hip to SW, full hips to NE and on
midstrey. The original structure is fully described, with measured drawings and
perspective details, in C.A. Hewett, The Development of Carpentry, 1200-1700, an
Essex Study, 1969, 22-32, 55-8, 171, 188, dated by radio-carbon to c.1200.
Dendrochronological analysis of one core indicates construction soon after 1220
(Fletcher, Tapper and Morris, Vernacular Architecture 16, 1985, 41). In a major
alteration datable by comparison with other structures to the first half of the
C16 the NE bay was reduced to a half-bay with hip, the walls were rebuilt, and a
crownpost structure was added to the existing roof. These walls have jowled
posts, heavy studding with curved bracing trenched to the inside, and
edge-halved and bridled scarfs in the wallplates. The plain crownposts are
down-braced to the tiebeams, with axial braces to the collar purlin. The
midstrey is of early C17 construction, with jowled outer posts, unjowled inner
posts, primary straight bracing above the girts, no bracing below the girts, and
a clasped purlin roof projecting on struts over the great doors. There have
been repairs and piecemeal replacements at various times from the C18 to the
C20. Some arcade posts have been shored up to replace the sills and plinths
below, leaving shoring notches in the posts (J. McCann, Building marks on wall
posts, Period Home, June/July 1981, 33-4). Some arcade posts and some sections
of arcade-plate are reinforced by bolted parallel timbers. A section of arcade
plate opposite the midstrey and extending for half a bay in each direction has
been replaced. The tiebeam of the truss to NE of the midstrey has been
replaced, and in the next truss to the NE all parts except the arcade-posts have
been replaced. The lower ends of all passing-braces have been removed in
connection with the replacement of the aisle walls, but their former positions
may be deduced from the notched-lap matrices and oblique trenches in the
surviving structure. Other original braces are missing, leaving similar
evidence. An unusual feature of this building is a pattern of auger holes high
on the arcade-posts and arcade-braces, having no structural function, probably
used for attachment of staging during the original construction; few other
timber-framed buildings are so high as to be beyond the reach of ladders. Small
lean-to extension at N corner demolished 1986. RCHM 3.