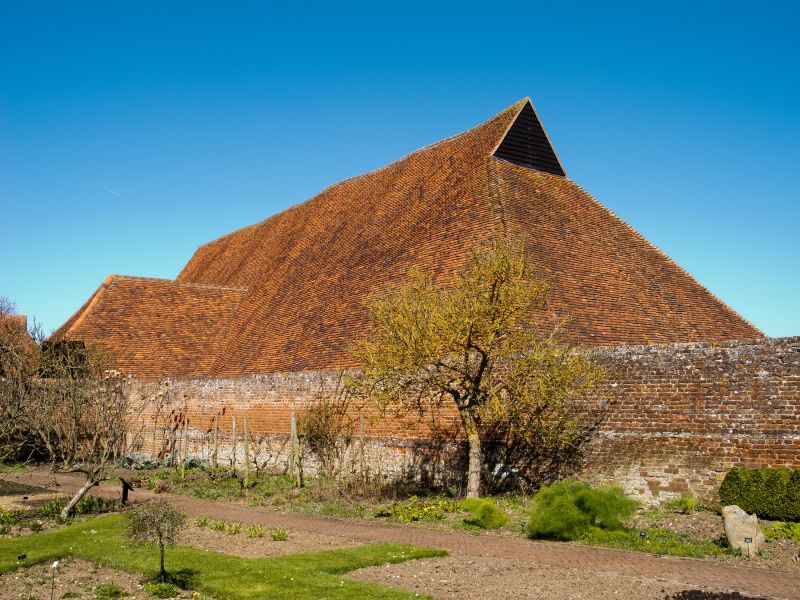 Barn. Mid to late C13, altered in early C16 and C18. Timber framed,
brick-nogged and partly weatherboarded, roofed with handmade red plain tiles, on
plinth of red brick in various bonds. 7 bays aligned approx. NW-SE, with 2
aisles and midstrey to SW. 40 metres long, 13 metres wide, 13 metres high above
the plinth, which is approx. 3 metres high at the NW end owing to the site
gradient. Vents in brick nogging. The main roof has a gablet hip at each end;
the midstrey is half-hipped. The original structure is fully described, with
measured drawings and perspective details, in C.A. Hewett, The Development of
Carpentry, L200-1700, an Essex Study, 1969, 40-7, 58-61, 174, 189, dated by
radio-carbon to c.1255. Dendrochronological analysis of one core indicates
construction soon after 1280 (Fletcher, Tapper and Morris, Vernacular
Architecture 16, 1985, 41). In a major alteration of the C16 the walls have
been rebuilt with jowled posts, with edge-halved and bridled scarfs in the
wallplates, and straight or near-straight braces below the aisle ties and above
some of them. The brick nogging is not an original feature of these walls; the
bricks appear to be C18 or later, and the grooves in the posts to key the mortar
are cut after the timber has become fully seasoned. Many studs have been
replaced during this operation, or later; the least disturbed studding is in the
NW bays of the NE wall. The wallplate at the SE end is re-used from the
original construction, 12 metres long in one piece, retaining the matrices of
open and secret notched-lap joints. Some arcade-posts have been shored up for
replacement of the sills and brick footings below, as at the Barley Barn (item
4/72, q.v.). The midstrey is contemporary with the alterations to the walls;
the aisle ties are continuous with the wallplates of the midstrey. The great
doors and winnowing doors in the midstrey are C18. Opposite the midstrey, the
winnowing doors are C18, the great doors C19. RCHM 3.