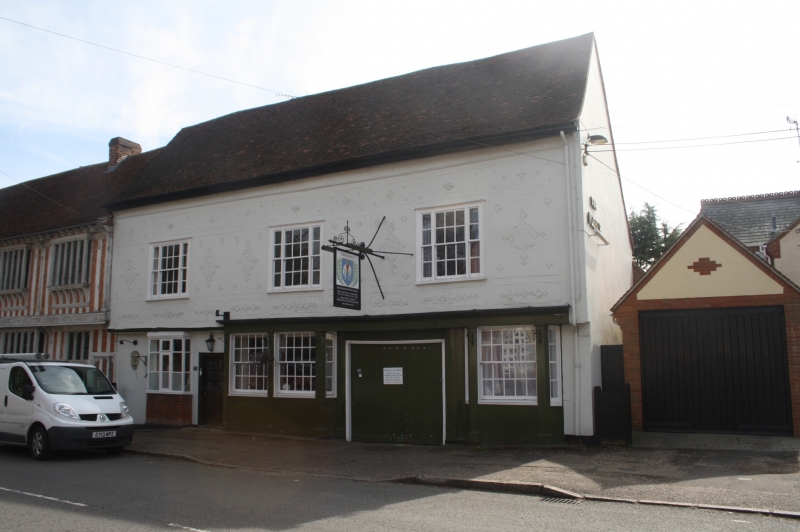 House, now public house. C15 and early C17, altered in C18, C19 and C20.
Timber framed, plastered, roofed with handmade red plain tiles. 4-bay main
range facing N with external stack to rear of left bay, early C17. To right,
C15 2-bay crosswing surviving from a former hall house on the site of the
present main range. C17 full-length 2-storey lean-to to rear of main range and
crosswing. C18 2-storey extension to rear of left end, roofed as a parallel
range, C20 single-storey wing to rear of it, and early C19 single-storey lean-to
extension to right of it, roofed with red clay pantiles. Early C19 single-
storey wing to rear of crosswing, extended to right in C20. 2 storeys. Full-
length jetty, and below it one C18 square bay of casements with pulvinated
frieze and brick below, casements altered; and 2 early C19 splayed bays of
sashes, respectively of 4-20-20-4 and 4-20-4 lights, with 5 simple pilasters,
continuous plain fascia and moulded shallow canopy. First floor, 3 early C19
tripartite sashes of 4-12-4 lights. Much crown glass. Mid-C18 half-glazed door
with 9 lights, 8 of original bullseye glass, one inscribed 'G. 1752',
transferred from an internal position. Double vehicle doors to passage through,
to left of crosswing. Pargetting on first floor, with C17/18 vine-leaf frieze
and roll-moulding below eaves, and modern date 1505, restored or modern designs
in panels below it. Scrolled wrought iron bracket for inn sign. In the vehicle
entry, at rear right, is a mid-C18 window of 12 fixed lights, one of original
bullseye glass. In the left elevation of the rear left wing is one mid-C18 sash
of 12 lights, re-set, and one early C19 sash of 16 lights. To the rear of the
rear lean-to is one early C19 sash of 10+10 lights. Framing is exposed
internally in the upper right wall of the crosswing, with wide curved tension
bracing trenched into the studs. The walls have been raised approximately one
metre in the early C17 rebuild, and the floor and jetty rebuilt; chamfered
transverse and axial beams with lamb's tongue stops. The main range has jowled
posts; the front left post has a carved and ovolo-moulded step supporting the
girt; chamfered binding and bridging beams with lamb's tongue stops, joists
plastered to the soffits. A ground-floor studded partition has been removed.
The upper storey is of unusual height, with similar beams and joists above. In
the front wall of it is one blocked original window in the main range, with one
ovolo mullion, the saddle bars missing, and a similar inserted window in the
crosswing. On each floor is an original wood-burning hearth with ovolo-moulded
jambs and depressed arch, and rear splays. The date 1505 in the modern
pargetting has no historical basis, derived only from Paycockes, to the left
(item 9/227, q.v.). Listed at the higher grade for exceptionally complete
details of the early C17 phase, and later exterior features. RCHM 86.