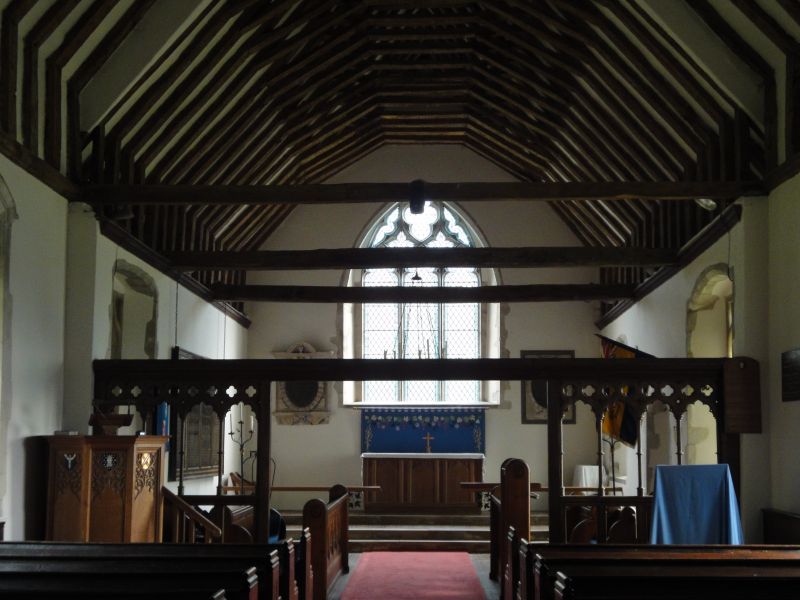 Parish church, nave late C11, chancel C13, both altered in C14 and C19, W belfry
C15, S porch C19. Walls of flint rubble including re-used material from a Roman
building, dressings of tufa, limestone, clunch and Roman brick, roofed with
handmade red clay tiles, belfry timber-framed and weatherboarded. The E window
of the chancel is C19, except the chamfered splays, 2-centred rear-arch, and
label with 2 male headstops, C14. The N window is C19 except the splays and
rear-arch, C14. In the S wall are 2 windows, the eastern C19 externally with
widely splayed jambs and segmental-pointed rear-arch; the western window is
similar to that in the N wall. Between the windows is a doorway, mainly C19,
with splays and segmental-pointed rear-arch, early C14. Diagonal buttresses,
C15. The lower parts of the nave walls are set in herringbone courses. There
are identifiable fragments of tegulae, opus signum and one imbrex, suggesting
that the church occupies the site of a Roman villa and is partly composed of
its materials. In the N wall there are 2 windows, the eastern of 2 lights,
mainly C19, with square head and internal label, C14, the western window mainly
C19 with splays and chamfered rear-arch, C15. Below this window there are
traces of a former doorway, and between the windows there is a small round-
headed window, late C11, blocked. In the S wall there are 2 windows, the
eastern uniform with the eastern window in the N wall, the western mainly C19,
with splays and hollow-chamfered rear-arch, C14. Between them are traces of
a former window of tufa, typically a material of the C11. W of the window is
the S doorway, with a moulding comprising two double ogees divided by a shallow
cavetto, late C14. The door has a marginal decoration of fleurons and a rear
frame of portcullis type, late C14. In the W wall there are 3 oculus windows
(one partly collapsed) arranged irregularly and blocked on the inside, late
C11. The W doorway has jambs of Roman brick, chamfered imposts and segmental
head within a round arch. The door appears to be original, with 4 ledges and
saltire braces butt-notched into the ledges in the same manner as in the chancel
of Chipping Ongar Church (Hewett 1982, 3-4), V-edged boards weathered on the
outside (although now protected by the C15 belfry) and strap hinges with incised
zigzag decoration, a remarkable survival. The NE and SE quoins are of Roman
brick arranged in the manner of Saxon long-and-short work, further evidence
of Saxo-Norman construction. A diagonal buttress was added at the SW in the
C15. The roof of the chancel is of 7 cants with double collars, formerly lathed
and plastered, late C14. There are 2 tiebeams, plain-chamfered with lamb's
tongue stops, and disused soffit-mortices at their ends. The western tiebeam
has a sunk panel with defaced inscription IT ANNO DON 1615 HL. The roof of
the nave is similar in construction, with 2 plain-chamfered tiebeams of which
the western forms part of a former bell-turret with empty mortices for
supporting posts, the structure almost complete up to roof level, late C14.
(Hewett 1982, 67-8). The W belfry is constructed in at least 3 phases, C15
and C16, with curved saltire bracing in the second stage and a separate outer
frame carrying the weatherboards. There are 2 bells, the first dated 1567, the
second inscribed in Lombardic letters IN HONORE SANCTE JOHANNES, probably C14.
The chancel screen reported by the RCHM has undergone extensive repair in the
interim. On the S side 4 bays with cinquefoil heads and quatrefoil piercings
above remain, with 3 turned shafts; on the N side only half of one head and 2
turned shafts remain; the rest is reproduction. Some C14 and C15 glass remains,
in situ in the NE window of the nave, mainly reset in the SW windows of the
chancel and nave. On the E wall of the chancel there is a marble tablet to
George Kindleton, Rector, 1667, surmounted by cornice and segmental pediment
containing a flaming vase, inscription in oval panel with laurel wreath and
cherub's head; and on the S wall a marble tablet to Mrs. Ann Broughton, 1801;
and slab to William Rawlius and Ann Rawlins, his sister, 1703. On the S wall of
the nave there is a white marble monument to William Cole, 1729, with crest
above five children, named. At the W end there are floor slabs to William Cole,
1729, Mrs. Ann Martyn, 1758, and Henry Cole, 1760, all black marble with
achievements of arms. On the N wall of the chancel the Lord's prayer, the Ten
Commandments and the Creed are painted in gilt letters on 4 arched panels in a
rectangular wooden frame, the surrounds painted in imitation of marble, early
C18. Outside against the S wall of the nave, there is a tomb-chest to William
Cole, 1716, with gadrooned slab, carved cherubs and bones on the front, mounted
on 3 stone steps.