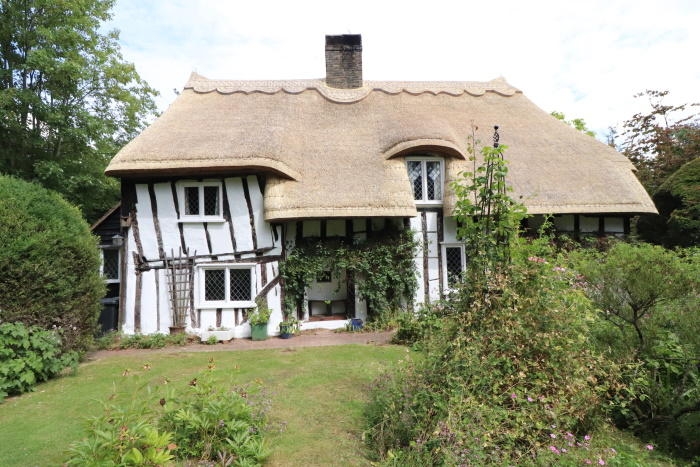 Hall house, c.1400, altered in late C16/early C17. Timber framed, plastered
with frame exposed externally, roof thatched. 2-bay hall aligned approx. E-W,
integral storeyed parlour/solar end to E, crosswing to W, originally jettied
to S, now underbuilt. Original main door to S, at W end of hall, now blocked
by inserted brick chimney stack, late C16/early C17, and forming an alcove
accessible from outside only, the present door being to the N. Single-storey
with attics, and 2 storeys in crosswing. S elevation, original doorway with
3-centred arch, blocked internally as above, 3 C2O leaded casement windows;
on first floor, one more, and another in eyebrow dormer. Roof hipped at W,
half-hipped at E. Framing exposed internally. Jowled posts, heavy studding,
curved braces trenched outside, interrupted tiebeam construction at E end.
wattle and daub infill in external and internal walls largely intact. Hall
window to N with transom, heavy centre mullion and 2 diamond mullions to each
side, with C20 leaded glazing outside. Cambered central tiebeam chamfered below
in 2 orders, with one deep arched brace present. Octagonal central crownpost
with 4 arched braces. Original roof of main block intact with all rafters,
collars and collar-purlin. Roof of crosswing rebuilt. Timber framed smoke
hood, mid-C16, over whole W bay of hall, intact, a rare survival, with inserted
brick chimney inside it, late C16, leaving the timber structure unaltered.
Second brick chimney, back to back with the first, early C17, in the original
cross-entry, blocking it and forming the external alcove described above.
Original floor in E bay, of lodged longitudinal joists of horizontal section.
Inserted floor in E bay of hall, of longitudinal joists of vertical section,
exposed. Original floorboards. Edge-halved and bridled scarf in S wallplate.
This house contains an exceptional number of original features, and illustrates
particularly clearly a sequence of development which was common in other hall
houses in Essex, but where the evidence is now less satisfactory. Up to the
C16 it had an open hall, with a hearth in the W bay, separated from the cross-
entry by a reredos of non-flammable material, probably flint rubble or mud.
In the early or mid-C16 a timber framed structure was built around the hearth,
and a pyramidal smoke hood above, occupying the W bay of the hall from tiebeam
to tiebeam - all of which is still present. This left the cross-entry
unobstructed. Later a floor was inserted in the hall, the upper room thus
provided being lit at first by the upper part of the hall window. Later still,
a dormer window was constructed; the,evidence of the Walker maps in Essex Record
Office suggests that this development did not occur until after 1600.
In the early C17 a second brick chimney was built, back to back with the first,
blocking the cross-entry, converting the original service end to a parlour,
the original parlour at the E end becoming a service room - as it is still.
In a larger house the chimney stacks could have been placed axially, producing a
lobby-entrance to the front, but here the first stack was off-centre, against
the S wall, so a lobby-entrance developed to the N, as it has remained. The
jetty was underbuilt, re-using the same timbers, and the house was clad with
weatherboards, over the original wattle and daub; the weatherboarding was
removed in the early years of the C20, since when there have been no other
significant alterations.