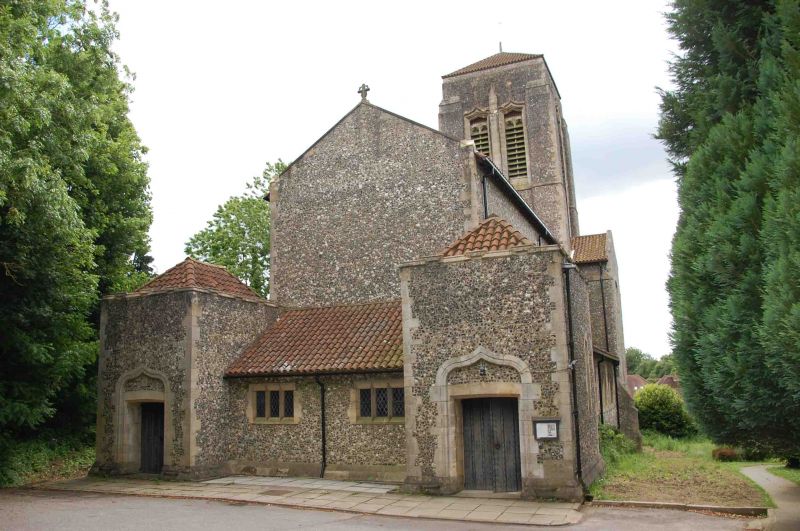 EXTERIOR: The style of the church is freely-treated late Gothic. The design and its impact have much to do with the nature of the site which falls away markedly to the E, thus enabling a towering E end to the church. At the W end, however, the church is still tall with a blind W wall to the nave which rises up behind the baptistry which, in turn is flanked by a pair of projecting porches which are covered by hipped roofs behind minimalist battlementing. The baptistry has a pair of plain, three-light and square-headed windows while the porches each have W-facing doorways with ogee heads above the square lintels. In the low aisles there are almost continuous six-light square-headed windows with cusped lights. Above, the nave walls are blind having no clerestory. In the transepts there are very tall three-light windows with segmental arched heads and depressed reticulated tracery. The sanctuary windows have two lights and are cusped with unusual crocketed tracery. At the E end the sanctuary wall is blind apart from two two-light square-headed windows lighting the vestries. At the heart of the building the crossing tower has clasping pilaster buttresses, a shallow pyramidal roof and a NE rounded stair-turret with a vertical line of small windows. The belfry windows are of two lights and have scalloped arches with crocketed pinnacles, the lights being divided by a pilaster.

INTERIOR: The church is entered down steps from the W porches. Its interior is outstanding for its subtle use of light, culminating in the brightness of the crossing and sanctuary. The plastered walls are painted white and there is plain glass in the windows. The aisles and nave are divided by four-bay arcades which have piers of rectangular section with rounded corners, the arch mouldings dying into the piers. The nave is very tall and has an unpainted and unstained arch-braced A-frame roof with king-posts, the braces being carried on wall-posts on moulded corbels. In the roof there are five sets of purlins with vertical plain boarding behind. The roof in the sanctuary is similar. In the aisles the roofs are of lean-to construction and also are unpainted and unstained. The timber ceiling over the crossing is secondary and rather robs the crossing of its intended effect. Around the crossing the arches are tall and have respond shafts with moulded bell capitals and bases.

PRINCIPAL FIXTURES: The focus at the E end of the church is the tall textile reredos hung off a wooden cornice decorated with pairs of gilded angels. The side windows of the sanctuary are recessed behind enclosing super-arches. The elegant choir stalls have shaped ends and two tiers of small, piercings in the frontals. In the nave the seating is made up of chairs. The font, located in the W baptistry, has a polygonal bowl with a carved frieze on a stout tapering base with hollow chamfered facets. The pulpit is conventional and is polygonal; with pierced tracery panels to the sides and is mounted on a stone base. In the aisle walls there are original recesses for radiators and slit vents under the window sills. The flooring of the crossing and sanctuary is lozenge-patterned oilcloth while the nave has plainer oilcloth flooring. dating from the 1980s, the organ is sited in the N transept (where the original organ was also placed) with the console in the S transept.

HISTORY: This church replaced a small wooden building erected in 1912. A more substantial church was proposed by the Rev. Frederick Francis Field in 1916 but no progress was made due to the First World War. The church was built in 1929-30 and a new parish of Terriers was created in 1937.The cost was £16,577 for the structure plus c.£3,525 for the architects fees, fittings, organ etc. It could accommodate 260 people. It was Field's widow who selected Sir Giles Gilbert Scott as architect. He was the grandson of Sir George Gilbert Scott, the most successful church architect of the C19, and was articled from 1899 to Temple Moore who was England's leading church architect between about 1895 and 1914. Scott commenced practice in 1903 having just won the competition for the Liverpool Anglican cathedral (he was 22 when he entered it). He worked in partnership with his younger brother Adrian. He was knighted in 1924, won the RIBA Royal Gold Medal in 1925 and was awarded the Order of Merit in 1944. St Francis' church is one of his best works.

REASONS FOR DESIGNATION:
The church of St Francis, High Wycombe, is designated at Grade II* for the following principal reasons:
* It is an outstanding building by a great architect of the C20.
* The design is both beautiful and imaginative, showing a mastery of planning, detail and lighting.