A Grade I Listed Building in West Wycombe, Buckinghamshire 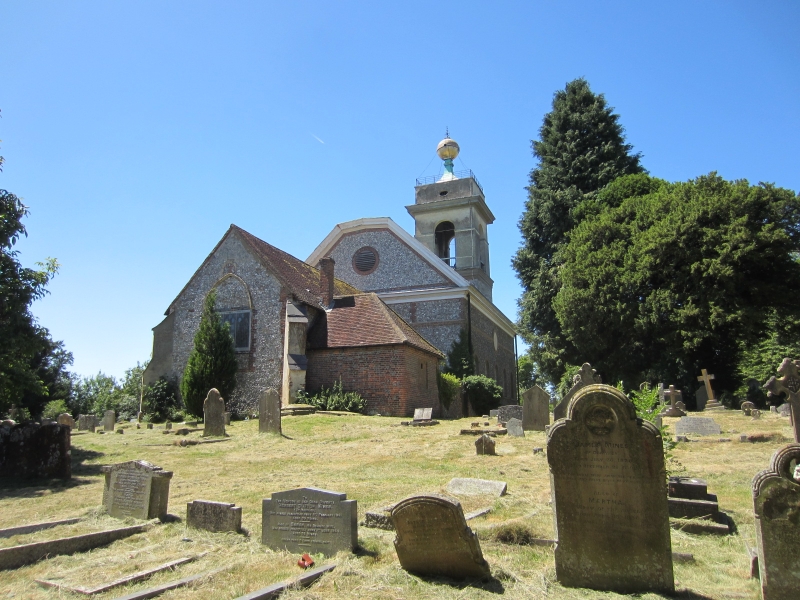 2.
On the site of a medieval church, {retaining} the medieval west {tower} subsequently remodelled end heightened. Nave rebuilt for Sir Francis Dashwood Bart,patron of the living, 1751-63. Upper part of tower not later than 1757, when it appears in a dated engraving. Its crowning wooden finial of a
great gilded ball perhaps inspired by the Dogana, Venice. Interior of nave designed as a large room lined with engaged Corinthian columns under continuous entablature enriched by elaborate plaster cornice and frieze. Stucco relief motifs in band between capitals below which are stucco swags. Painted coffered flat ceiling. Low chancel with ceiling painted, 1765, by Giovanni Borgnis; structure of chancel and some details C13. Some fine original fittings. C17-C19 monuments including 2 by Nollekens. Wall painting with royal achievement of arms above chancel arch. Patterned stone floor. C18 remodelling of body of church said to derive from prints of the ancient Temple of the Sun, Palnyra.

Church of Saint Lawrence and the Mausolemn form a group.