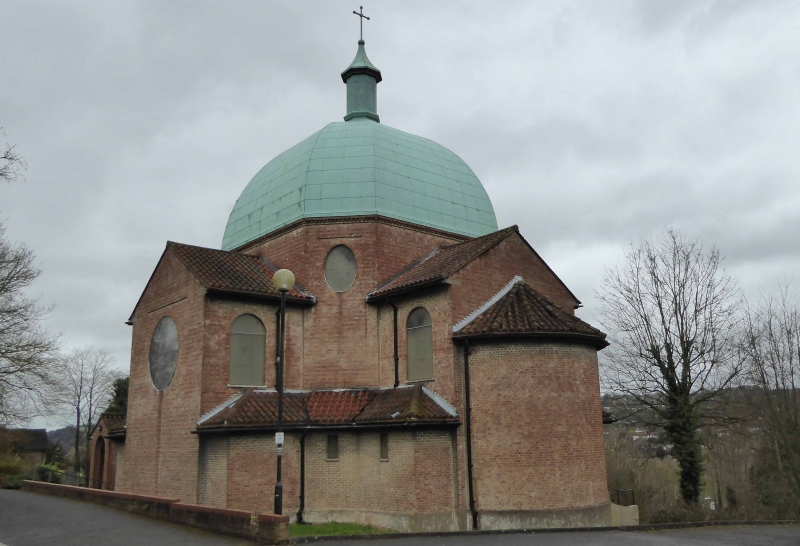 EXTERIOR: This is a landmark building on a hilltop site in a free Byzantine style with a large copper dome. On top of the dome is an octagonal turret with a tent roof terminating in a spike. The fenestration has mostly round-headed windows with spoked glazing bars in the heads. The clerestory windows in the nave have, in the east part, a triple arrangement of a taller window flanked by two lower ones, and, further west, one large window. In the crossing tower there are oculus windows in the canted corners, and there is a further large oculus in the south wall of the south transept. The sanctuary apse is blind. At the west end the gabled belfry has a cross-shaped opening to the west and two-light north and south windows. The gabled south porch at the west end of the south aisle has a plain round-headed outer doorway and good, original two-leaf panelled inner doors with cross-shaped glazed panels.

INTERIOR: The interior has clean, harmonious lines and is very light, as all the brick surfaces have been painted white and pale yellow; this has impacted on the original design, however. In the crossing there are blind round-headed recesses below the oculus windows which serve to light the space under the dome. To the sanctuary there is a plain round-arched opening. The nave is two unequal parts, one bay having three plain arches to the passage aisles and the other just one: this reflects the external arrangement of the clerestory windows. Both bays have a tall transverse arch rising to the level of the flat ceiling. In the west wall there is a triple arch arrangement at ground level leading to the former baptistry which has now been glazed in as a quiet space. The nave has a wood-block floor and there is stone paving in the sanctuary.

HISTORY: The church was built to serve the expanding population of the north-west part of High Wycombe and is now surrounded by largely post-war housing. Wellesley and Wills exhibited at the Royal Academy in the 1920s. They included Lord Gerald Wellesley (1885-1972), later 7th Duke of Wellington, who was made a FRIBA in 1921 and served as surveyor to the King's Works of Art in 1936-43, when he succeeded his nephew as Duke. This is his only known church. They also worked on decorations at No. 15 Kensington Palace Gardens in the 1930s, and restored the c.1700 Old Palace Place, on the Green, Richmond, for Sir Kenneth Clark in 1928. Wellesley also designed the folly at Buscot Park for Lord Birthers, an equally imposing brick structure. The use of round-arched styles in the inter-war period was popular for church building and in this case there is the distinctive addition of a large dome. The passage aisles are characteristic of church architecture of the period. The character of the interior has been much altered by the application of paint to what originally would have been bare brick walls.

REASONS FOR DESIGNATION:
The Church of St Mary and St George, High Wycombe, is designated at Grade II for the following principal reasons:
* It is of special interest as a late 1930s free Byzantine style church which is a good representative of the diversity of round-arched architecture as applied to new churches in the interwar period
* The hilly site and the copper-covered dome make the church a landmark in High Wycombe
* It has a spacious, light interior with passage aisles that are characteristic of interwar churches. The internal spatial arrangements have been slightly altered by the moving of the font and turning the baptistry into a quiet area
* This is the only known church by Lord Gerald Wellesley, later 7th Duke of Wellington, who was known as an aesthete and occasional architect