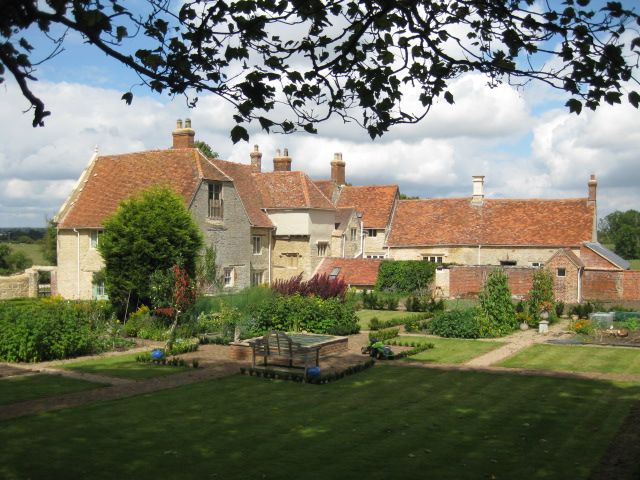 2.
A rambling stone building of 2 storeys and attics with deep pitched early tiled
roofs, stone chimney stacks with late brick flues. It dates probably from the
late C15 or early C16 with mid C17 alterations and additions. The plan is roughly
L shaped,with the entrance front facing west. At the south end of this front
there is a projecting gabled wing in which there is one C18 sash window to both
floors. The main central section of the west face has 2 high gabled dormers on
the carry-up of the wall, 2-light mullioned windows with leaded casements. All
gables have coping with kneelers. There is a 2-storey gabled porch with a 2-light
mullioned window to the 1st floor, a continuous moulding at the 1st floor level,
stepped up at the centre to enclose a carved datestone, S.B. (Simon Benett) 1659.
The outer doorway has an elliptical head with a carved console key. The inner
doorway is square headed with moulded wooden frame. Gothic glazing in upper part
of doors. 2 of the early mullioned windows survive, the others are C18 casements
and sashes, some in early openings showing moulded stonework. A long lower wing
lies east at the north end of that already described. Alternate thick and thin
ashlar to east. Rubble to north. High tiled roofs, ashlar chimney with moulded
string and cap. 2 three light mullioned windows with flat arches over labels.
At rear of main wing is a projecting section with Jettied 1st floor, the upper
walls being lath and plaster. 3 surviving 3 light mullioned windows with labels.
Varying roof-lines overall. 3 early stone fireplaces survive, they are high and
wide with moulded 4 centre arch heads.