A Grade I Listed Building in Newport Pagnell, Milton Keynes 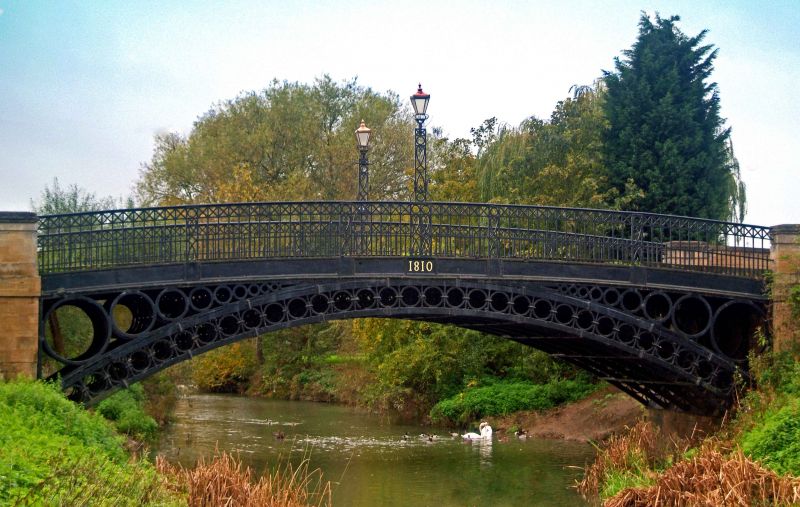 I
Road bridge. Begun in June 1810 and completed by September 29th 1810 when the first tolls were charged. Dated 1810 at the centre of the arch on each side. Repaired 1900 and 1976. The concept design was by Henry Provis of Paddington, Engineer to the Grand Junction Canal, modified by Thomas Wilson, Engineer of Sunderland and Rowland Burdon MP. It was cast in iron by Walkers of Rotherham Yorks. under the direction of William Yates, site engineer for Walkers using iron dowels and keys instead of bolts.

Cast-iron bridge and sandstone abutments. The abutments are built of local sandstone and have piers at either end, coping and band at base of the parapet. Between them the cast-iron bridge has six segmental compound arched trusses with circular designs, each cast in eleven voussoir segments joined with mortice and tenon joints, spanning 17.68m. (58ft) and linked horizontally by diaphragm beam. The road-plate deck is set in continuous lugs and is carried by cambered beams which are joined to the arches by diminishing circles of square section bars in the spandrels. The carriageway has cast-iron railings each side, with four decorative stanchions between the stone end piers, and at the centre a raised lamp standard each side. The bridge was strengthened by wrought-iron plates added to the two centre bays in 1900 and a reinforced concrete deck on plastic foam placed over the bridge in 1976.

HISTORY: constructed under an Act for the replacement of the road bridges at Newport Pagnell which gained Royal Assent in June 1809. Tickford Bridge is one of only three surviving bridges (only two in this country) of a notable series of cast-iron bridges cast by Walker and Co. The first was constructed in 1801 in Spanish Town in Jamaica which is similar to Tickford Bridge but in poor condition. The second is an estate bridge at Stratfield Saye in Hampshire built in 1802 which has cast-iron arches of a similar design of circles but the lower parts have straight divisions instead of circles, it is not so wide and the cast-iron balustrading is of a simpler design but also stretches along the abutments.

Tickford Bridge is a foremost work of early cast-iron engineering, still surviving in near its original condition and taking modern traffic. It is a monument of national importance in the history of civil engineering and the use of cast iron.