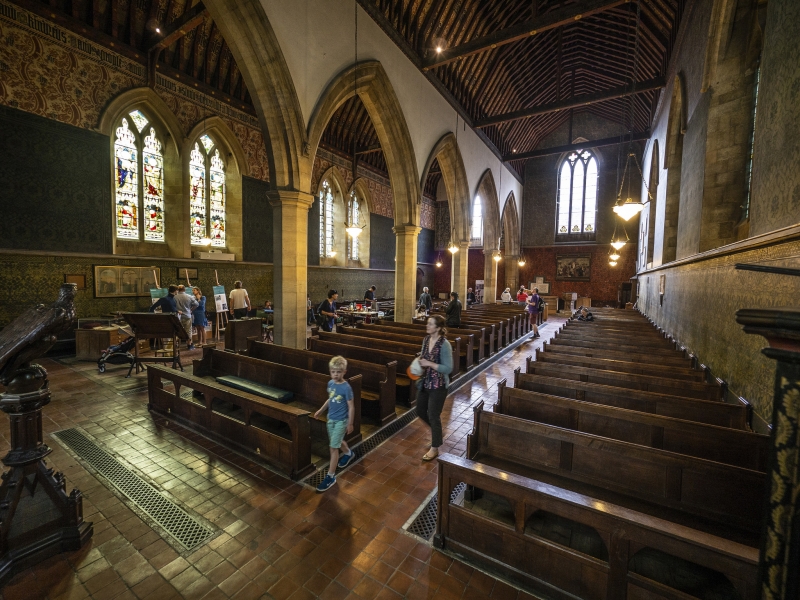 
(Formerly listed as JESUS LANE Church of All Saints)

EXTERIOR: The tower is an important Cambridge landmark and one of the tallest structures in the city. The north side to Jesus Lane is the show front. The church is wholly in an early C14 Decorated style, and is the first use by Bodley of the English Decorated, which subsequently became his preferred style.

Very large 5-light east window, the north and south walls of the chancel are blind. The design of the substantial tower is based on that of Ashbourne, Derbyshire, and has a projecting north-east stair turret with an external doorway. The tower has striking carved corbels below the embattled parapet, and gargoyles at the corners. Each face of the tower has a pair of transomed 2-light belfry windows with pierced stone panels. The north face of the tower has a 3-light window with intersecting tracery. There is a very fine, tall broach spire, added as part of the second phase of work on the church. It has five tiers of lucarnes, the lowest tier with transoms and flowing tracery in the openings. In addition, the north-east stair turret on the tower is also a small, crocketted spirelet with a gabled and traceried base that rises above the tower parapet.

The nave has a 3-light west window with intersecting tracery, and 2- and 3-light Decorated-style windows on the north side, the tracery part of the second phase of work. The north-west porch is gabled. The south aisle is shorter than the nave and has a 5-light uncusped east window, a Y-tracery west window and 2-light windows in the south wall. There are two doors on the south side, that to the vestry trefoil-headed. The lean-to south-east vestry and boiler house are in the angle between the east end of the south aisle and the chancel.

INTERIOR: The interior is quite dark and architecture is simple compared to the exterior, but it makes up for this plainness with extraordinarily rich painted decoration and good, contemporary furnishings. The tower stands over the western part of the chancel, with a small sanctuary beyond, and the tower arches, including an arch into the east bay of the south aisle, give the impression of a crossing. The tower arches and the five bay south arcade have chamfered arches on polygonal piers or responds with moulded capitals and bases. There are tall tie beam and king post roofs in both nave and south aisle. There is a flat timber roof over the choir, under the tower, which is divided into panels by moulded beams, and the sanctuary has a boarded, canted wagon roof.

The C15 font survives from the old church. Octagonal, with alternating Tudor roses and shields, it was repainted in the C19. There is also a second font, designed by Bodley in 1863. Of alabaster, it has a traceried stem and Tudor roses on the bowl. Timber pulpit 1864 by Bodley which was painted by Wyndham Hope Hughes in 1874. The lectern is 1900. The chancel screen was designed by John Morely and made by Rattee and Kett in 1904. It has delicate Art-and-Crafts perpendicular tracery and a coved cornice. Above it is a great cross, also painted. The south aisle screen by Bodley of 1879. The choir stalls and nave benches by Bodley are plain in comparison to the rest of the decoration. The fittings of the sanctuary were also designed by Bodley and include the high altar with riddel posts, 1904 steps to the altar, and a suite of textiles. The chancel floor and the risers of the steps have encaustic tiles.

The walls and roofs of the whole church, and the stone work including the piers and window tracery at the east end, are stencilled with bands of richly coloured pattern including fruit and floral motifs, IHS and IHC monograms, and texts. The choir ceiling has the symbols of the evangelists, and there is a Christ in Majesty flanked by angels and kneeling figures of the Virgin and St John over the western tower arch. The paintings were done in stages by several artists. The Christ in Majesty is 1875 by W H Hughes, and was repainted in 1904 by B M Leach. A painting of Jesus blessing the Children on the west wall is probably also by Hughes. The canopy of honour in the east end of the nave roof was executed by William Morris in 1864. Some of the ceiling decoration was carried out by F R Leach in 1870, supervised by C E Kempe, and other wall and ceiling decoration was designed by Bodley and painted by Leach in 1878-9. The stencilled decoration was also repaired and partly repainted by Leach in 1904-5.

The glass in the east window of 1866 by Morris and Co. is particularly notable. The figures were designed by William Morris, Edward Burne-Jones and Ford Maddox Brown and are set in white backgrounds, an unusual feature for the time. There is also other good C19 and early C20 glass including three windows by Kempe, two by Leach, and one of 1944 by Douglas Strachen.

A C18 chandelier in the east tower arch is from the old church. There are some monuments, including a number of C18 and early C19 wall tablets reset from the old church and a C19 marble tablet to Very Rev. Herbert Lucock, sometime vicar of All Saints.

HISTORY: All Saints has its origins in the Church of All Saints in the Jewry, in St John's Street. Early prints show that the tower was built on arches over the street. By the mid-C19 the medieval church was too small for the congregation, and as it stood in the way of development of that area of the city, it was decided to move it further north to Jesus Lane. The new church opened in 1864, and the old church was demolished when St John's Street was widened in 1865, although its churchyard is preserved as an open space.

After an initial desire to have Gilbert Scott as architect, George Frederick Bodley, who had been a pupil of Scott's, was chosen to design the new church. Bodley, who had set up his own practice in 1855, was to become one of the most important architects of the Gothic Revival. From 1860 a number of plans were drawn up for the church, but were rejected as being too expensive. The design was finally settled in 1862, and construction carried out in 1863-4 with a further phase of work on 1869-71 including the completion of the tower and spire and some of the north aisle glazing. The cost of the first phase was £5,408 with a further £2,036 spent on the second phase. All Saints is notable for the first introduction of Decorated-style motifs into Bodley's work, as the style became his trademark, but it has recently been noted (Hall) that the second phase of work made the building more Decorated than had been originally intended with the inclusion of flowing tracery in the windows and substitution of the very slender spire for a heavier broach spire originally proposed. Work carried out in 1904 to the decorative scheme was necessitated by damage caused by smoke from the gas lamps; the church was electrified in 1904 (chancel) and 1907 (nave). The church has been very little altered in the C20 and is one of the best preserved Anglo-Catholic interiors in England. It became redundant in 1973, and although there were proposals to demolish it a few yeas later, it passed to the Churches Conservation Trust in 1981.

REASONS FOR DESIGNATION:
All Saints' Church, Jesus Lane, Cambridge, is designated at Grade I for the following principal reasons:
* Outstanding parish church of 1863-4 designed by G F Bodley. All Saints is the first use of the Decorated style in Bodley's work, and as such is a seminal part of his oeuvre
* Very complete interior decoration including furnishings, stencilled and painted wall decoration, and stained glass designed by Bodley and others, including William Morris, C E Kempe, F R Leach and W H Hughes