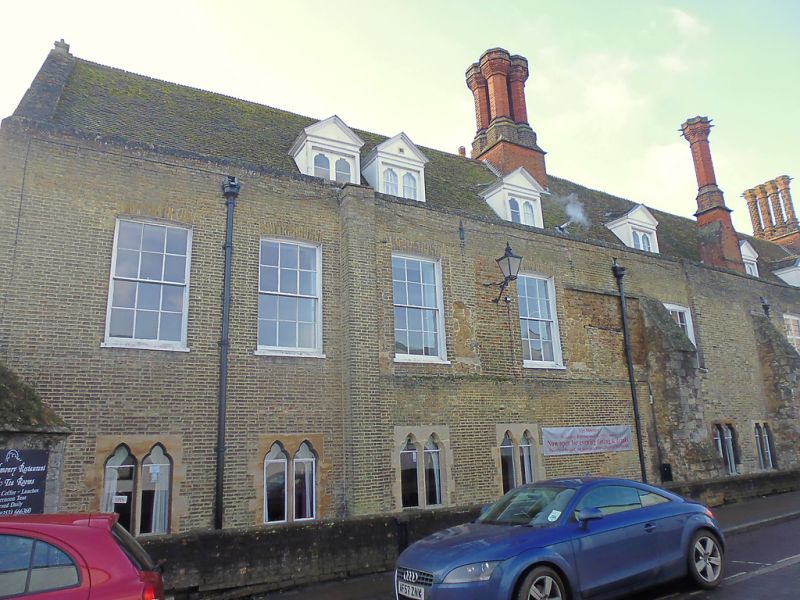 THE COLLEGE
1.
1082
The Almonry
TL 5480 1/88 23.9.50.
GV
2.
The Almonry stands at the east end of the long range of buildings which
back on to the High Street on the north side, including the sacristy, Gate
and Goldsmith's Tower. The space between the/Almonry and the Sacristy -
to the west of it was filled in during th C19 in similar style. The Almonry
is a late Cl2 building of Carr Stone rubble with Barnack stone dressings. It is
built above a vaulted undercroft of circa 1200, with ribs springing from central
octagonal columns with moulded capitals and bases. The upper storey originally
contained a school, chambers for the Sacrist and Chaplian, dormitories and
a chapel at the east end. 2 blocked lancet windows survive in the gable
end, The poor were fed in the undercroft. The north front has C19 or C20
windows on the lst storey and small, stone dressed windows with cusped arches
on the ground storey. The south front has similar windows, some with 2
lights. Roof tiled, with C19 gabled dormers and C19 moulded brick shafted
chimneys.

The Almonry, Wall to the gardens of the Almonry and Painted Chamber, the
Sacristy Gate and Goldsmith's Tower form a group with all the listed buildings
in High Street except No 2.
See also general group description under the Cathedral of The Holy Trinity.