Barn and Storehouse of the Monastery 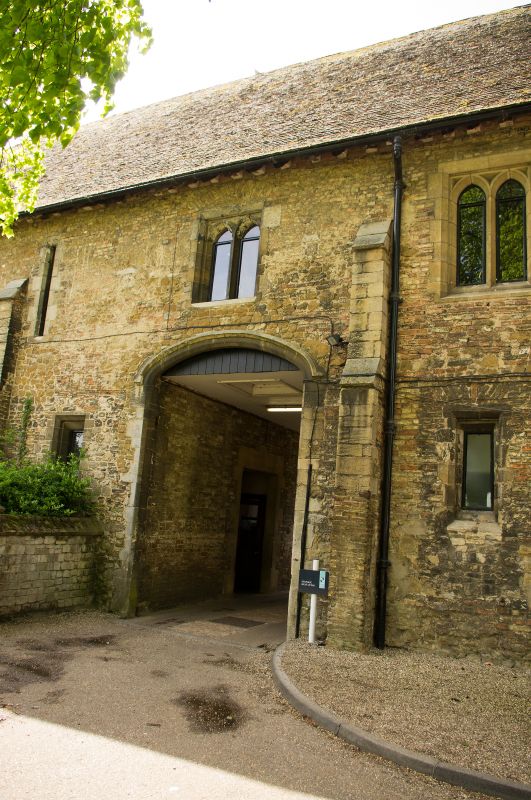 Entry Name: Barn and Storehouse of the Monastery

THE COLLEGE
1.
1082
Barn and Storehouse of
the Monastery
(Formerly listed as Barn &
Stables to south of Ely Porta)
TL 5479 2/6 25.9.50.
I GV
2
The barn and storehouse of,the Monastery was builtin the late C14 (circa
1575). It stands to the south of Ely Porta, which was built towards the
end of the century, and extends to the east. It is a long rectangular
building of 7 bays, the eastern part, of 5 bays, was used as a granary
and the western part as a-storehouse, now part of the King's School. 2
storeys, the upper storey is now used as the dining hall of the school.
It is built of Carr stone rubble and brick i,iith weldon stone dressings.
The north front is divided by buttresses (1 was removed when a covered
staircase was built at the west end, the position of this structure can
still be seen) and the south front is plain but with a thicker wall. In
the C15 a 3-centred arched cart entrance was constructed through the ground
storey. A large 4-centred doorway to the granary has now been made into
a window lighting the staircase to the dining hall. Some of the original
tall narrow loophole slit windows to the granary survive and also some
of the original 1 and 2 lights squared windows with cusped arches to the
lights. An arched doorway, originally at the head of an external covered
staircase, remains. Roof tiled, with stopped end gables. The roof structure
has been restored in the C20 end is now exposed in the dining hall on the
1st storey. A C18 cottage, originally a storekeeper's house, was built
in the C17 wall to the west of the barn. 2 storeys, the windows are casements
Roof tiled.

The Great Hall (Bishop's residence), the Queen's Hall (Headmaster's House),
Wall to the garden of the Bishop's residence, Guest Quarters of the Monastery,
Walls to the guest Quarters of the Monastery and Ely Porta, Prior's House
(Boarding House of the King's School) Prior Crauden's Chapel, Walls to the
garden of the Prior's House, Ely Porta, Barn and Storehouse of the Monastery
and Wall to the Barn and Storehouse form a group with Bishop's Palace, walls
to the Bishop's Palace, and Nos 2 to 8 (consec) and No 9 (stables to Bishop's
Palace). The Gallery.
See also general group description under the Cathedral of The Holy Trinity.