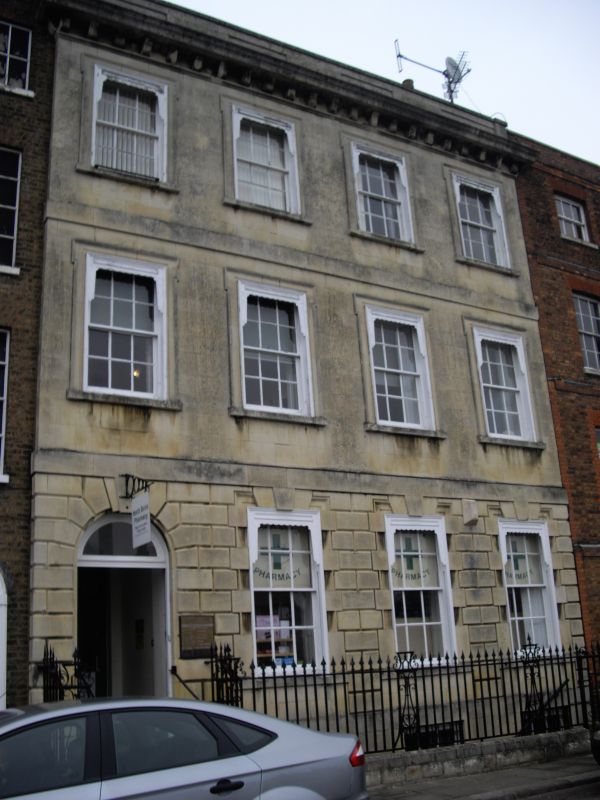 House built in the mid-C18 and used as a doctors’ surgery since the mid-C20. The large single-storey late C20 rear extensions are excluded from the listing.

C18 house used as a doctors’ surgery since the mid-C20.

PLAN: the building is located in a terrace along the north shore of the River Nene. It is rectangular on plan with a small projection on the west side of the north (rear) elevation.
The large single-storey late C20 rear extensions are excluded from the listing.

EXTERIOR: the four-bay building is in a Classical style and has three storeys with a service basement. It has a deep cornice with shaped modillions, a panelled parapet and wide storey bands. The entrance is in the left bay of the rusticated ground floor in a recessed round-headed arch with a plain fanlight and eight-panelled door. The three bays to the right are lit by six-over-six pane sash windows, flush with the wall, with key blocks and fanned stone arches. All the windows on the façade retain decorative blind fascias. The first and second floors are lit by slightly smaller six-over-six pane sash windows in lugged architraves. The basement has a door on the left, the upper panels of which are glazed, and two six-over-three sashes.

A stone plinth supports the original ornamental railings to the basement forecourt which have spear-head finials to the uprights, interspersed with lyre-shaped railings, and gates at either end.

INTERIOR: this retains many original features of fine quality. The entrance opens into a short passageway which leads into the former hall, and to the right are the front and rear reception rooms arranged either side of the staircase hall. The rear reception room is used as a dispensary and a large opening has been made in the party wall with the entrance hall from which to serve patients. A doorway has been inserted in the hall to provide access to the adjacent building.

The principal areas of interest are the staircase hall and the three reception rooms – two on the ground floor and one at the front of the first floor – which have six-panelled doors with raised and fielded panels, panelled window embrasures with shutters, and delicate cornices, mostly dentilled and enriched with egg-and-dart. In the staircase hall the opposing doors to the reception rooms have lugged architraves with a dentilled cornice and pulvinated frieze, surmounted by a dentilled triangular pediment. The rear ground-floor room has a ceiling roundel with acanthus leaf decoration, whilst the panelled room at the front has a fireplace with a grey marble lugged surround, a moulded frieze depicting fruit and foliage, and a later Art Nouveau cast iron grate and hood.

The handsome open well stair rises through three floors and is lit by an octagonal skylight. It has quarter-pace landings, a panelled dado, and an open string with carved tread ends. The moulded handrail is ramped up to the circular newel posts which have square caps. The first floor landing has the same arrangement of opposing doorways as on the ground floor but the lugged architraves with a pulvinated frieze are less elaborate. The panelled room at the front has long panels above the dado rail and shorter ones below. It incorporates a dentilled cornice that is pierced to form a sort of Greek key pattern, and a fireplace which has a lugged surround with a pulvinated frieze embellished with carved foliage, and a lugged overmantel panel. The ceiling has mouldings in shallow relief creating a delicate floral pattern. The rear room retains a dado, picture rail and cornice, and a round-arched C19 fireplace with a register grate. The other rooms on the first and second floors are plain and retain few original features. In the basement the recess for the range survives.

The Fenland town of Wisbech stands on the River Nene and grew in the Middle Ages as an inland port and market town. In the C17 the inhabitants resisted the draining of the Fens but this resulted in the town becoming a prosperous port. On either side of the river at the west end of the town are the North and South Brink, two well-preserved Georgian streets of merchants’ houses and warehouses, including the notable Peckover House which is now owned by the National Trust. The town has two market places and a sophisticated planned development called The Crescent which was built on the site of the castle in the late C18. Trade continued to flourish, especially after the Nene outfall to the Wash was improved with a new channel in 1827-30, and shipbuilding brought further wealth to the town.

7 North Brink was built c.1747 and was possibly designed by Sir James Burrough, Master of Gonville and Caius College, Cambridge. Burrough was an amateur architect and was much in demand as an architectural adviser in Cambridge where most of his executed work was carried out. There are ten buildings on the List associated with Burrough, all at Grade I and II*, including Manor House (1736-8) in Bury St Edmunds and Gonville and Caius College where he designed the north range (1753-5). 7 North Brink has been in use as a doctors’ surgery since at least the 1960s. In the 1980s a flat roof extension was added to the rear, and alterations were carried out to Nos. 7, 8 and 9, including the opening up of the wall in the hall area to allow ground floor access between the two buildings (Nos. 8 and 9 were by now also used by the doctors’ surgery). 7 North Brink was further extended to the rear in the 1990s.

7 North Brink, a house built in the mid-C18, is listed at Grade II* for the following principal reasons:
* Architectural interest: it is an excellent example of a mid-C18 townhouse with an architecturally refined façade in the classical style. The sophisticated treatment of the ground floor is especially notable for the manner in which the fanned stonework around the apertures flows into the rustication;
* Interior: the plan form and finely detailed interior has survived with a considerable degree of intactness and contains many well crafted decorative elements, altogether representing a mid-C18 house of considerable status and distinction;
* Architect: the possible association with Sir James Burrough, a nationally renowned architect whose work is well represented on the List, further enhances the special interest of the house;
* Historic interest: it forms a significant element in one of the finest and best preserved Georgian thoroughfares in the country;
* Group value: the majority of the buildings along North and South Brink are listed, many at high grade, and 7 North Brink therefore has strong group value with numerous designated assets.