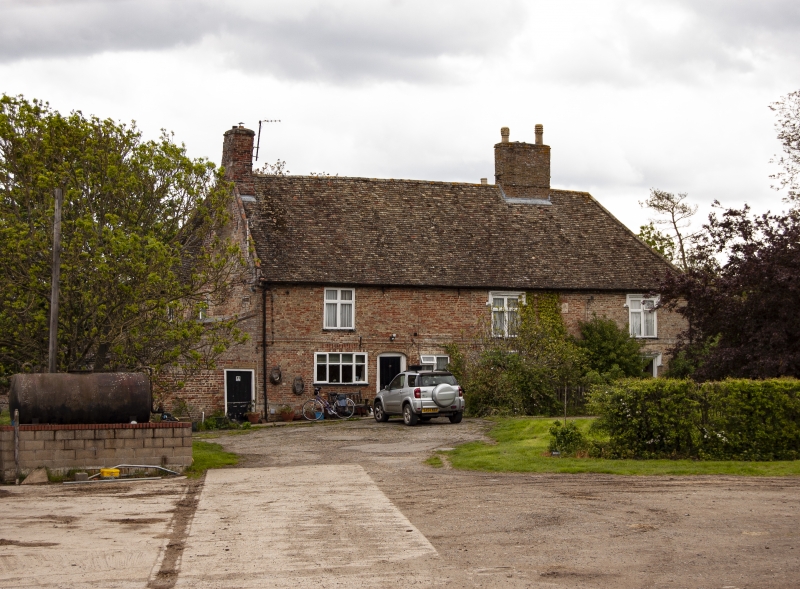 GV
II
House. Mid C17 and C18. Local narrow red and yellow brick, English bond on plinth with moulded brick to upper edge. Plain tiled roof, with modern tiles to rear pitch. Parapetted gable ends, hipped at the angle between front range and south wing. Saw tooth eaves cornice on the front and dentil eaves cornice on the rear. Ridge stack with string course. End stacks to each of the gables but the one to the north wing has been removed.

House originally of L-plan having a principal three room north-south range with a lobby entry and a family or guest wing at the south end. The north wing was added later and the north gable of the main range rebuilt at the same time. Including the north wing the house is now of half H-plan. Two storeys on the front. Two first floor C19 cross frame casements with moulded wood labels and return stops and a C20 metal window. Band between storeys. Similar ground floor fenestration with C19 cross frame casements and moulded wood labels, except for two modern windows to the north end. Lobby entry doorway in later architrave but with original door of four vertical planks with iron cover strips. The kitchen doorway has an elliptical arch of header bricks typical of C17. In this wall the brickwork at the south end is more uniformly of narrow red and yellow brick in English bond whereas the north end has larger brickwork particularly to the upper courses, in Flemish bond.

The south front to the garden is in two storeys. Similar narrow red and yellow brick in English bond as the front. The first floor has a pseudo-jetty on both north and south side walls. The first floor is carried on stepped brickwork and at both ends there are kneelers of moulded brickwork at first floor level and at eaves level to the tumbled gable end parapet. Inspection of the roof indicates that this wing was originally gabled on the west end and would no doubt have had a similar parapet and kneeler. The east gable of this range however has a straight joint in the brickwork suggesting either a rebuild or later date for the stack and gable end with its tumbled parapet and moulded brick kneelers or eaves at first floor level. At eaves height there is a timber wall plate with the lower edge having a series of peg holes. There is no other evidence of framing, and this timber has probably been reused. Three first floor window openings, including one that is blocked and three full length enlarged ground floor windows. The rear wall of the north-south range has an original doorway opposite the stack in elliptical header arch similar to that of the kitchen doorway. The C18 door has raised and fielded panels. Two storeys with similar narrow local brickwork, but to the north end some of the brickwork is of larger bricks in Flemish bond. At ground floor a later window has part of an original brick label.

Interior: the centre room of the original house now has the staircase and the inglenook is blocked. There are few internal features that remain from the C17. However parts of the side purlin roof are original. Within the roof space on the side of the stack is a plaster panel with the digits 16(?)7 only decipherable.

The manor of Wentworth was owned by the prior and convent of Ely and their successor after the Dissolution, the Dean and Chapter. The present owners are the Church Commissioners. During the C15 it was let to the Scrope family of Bolton (Yorks) and by the late C16 it was held by a junior branch of the same family from Hambleden (Hants). In 1650 the manor was sold to John Smyth of Wentworth.