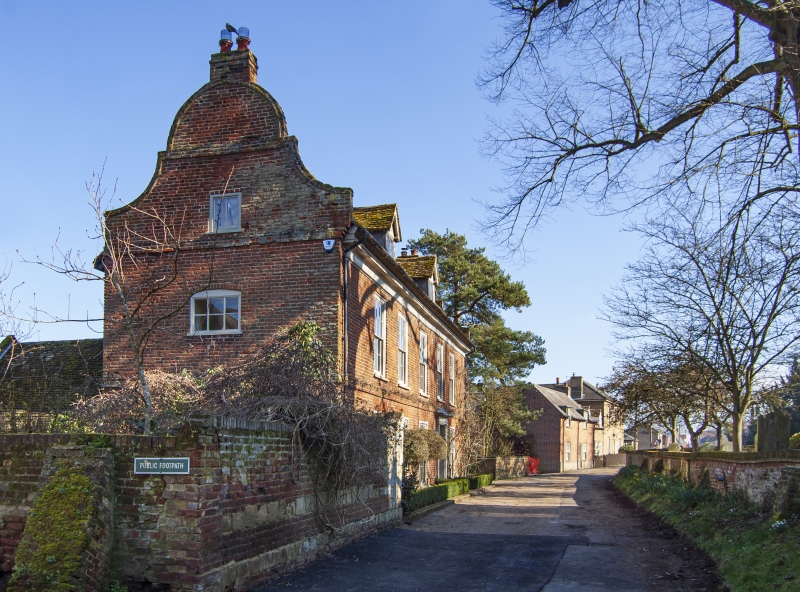 House. Late C17. Red brick, Flemish bond, in the front and mainly English
bond in the rear with plain tile roof and shaped gable end parapets on
kneelers. End stack and original side stack to rear wall, now internal.
Three room plan extended at the rear by three service wings of one room plan
each. Two storeys and attic. Two C19 gable dormers. First floor has five
twelve pane flush frame hung sashes in original openings, but with lowered
sills. The facade was probably symmetrical originally, having the doorway in
the centre bay. Two ground floor twelve pane hung sashes are in original
openings but the sills have been lowered. A narrower opening has been
enlarged for a similar twelve pane hung sash and this is possibly the site of
the doorway. Reset at the side of the doorway is a stone panel carved with
the date 1672 and believed to have been found in the garden. It is possibly
the date of the house. The west gable end has header arches to two windows.
There is an original red brick wall at the west end which incorporates reused
coursed limestone blocks and some gable coping of the same material. At the
rear are two linked gabled service wings. Red brick, English bond on plinth
with rebuilt upper walls and tumbled parapets. One storey and attic. At the
east end another service wing is of similar date but the roof was raised in
C19. Interior: The original plan was probably of three rooms, having a
kitchen at the east end with an inglenook, a hall with hearth and shaped rear
wall in the centre and a parlour also with smaller hearth at the west end. It
is possible that there was a fourth room to take the hall and staircase.
There appears to have been some disturbance of the staircase. This would have
taken place in order to gain access to the rear ranges. The staircase is of
open well type with a closed string, toads back rail and square newels. The
turned balusters to an upper flight are original and the rest have been made
in replica. The roof is of staggered butt purlin type. One of the rear wings
preserves it inglenook and a back staircase was inserted to lead to the attic
of the main part of the house.