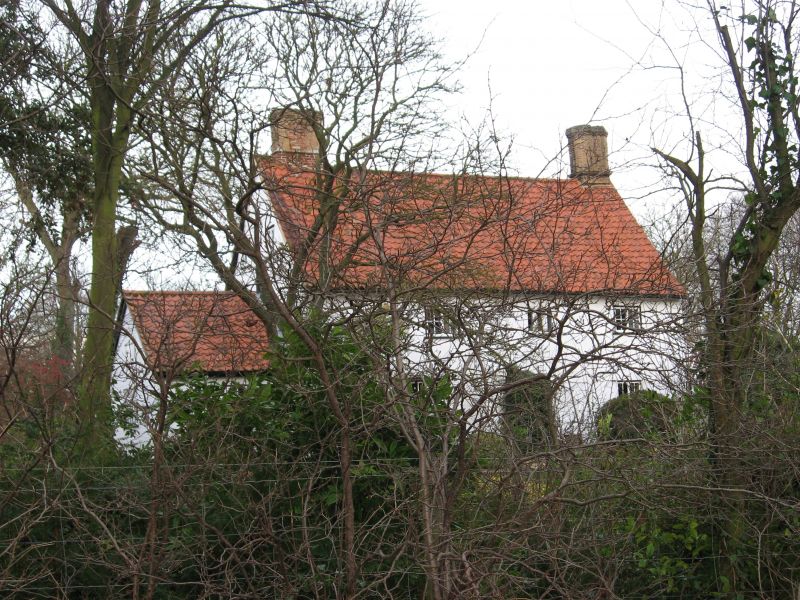 House, originally a chapel. Early C13 converted in late C16 or
early C17 when a bay was added to the West end. This bay was
demolished or collapsed and has in turn been replaced by a
single storey brick room in C20. Apart from minor alterations
the original clunch rubble and limestone walls of the C13
building are intact. On the South side are two buttresses, of
post medieval date, with the offsets rebuilt. On the North side
the original wall has been cased in gault brick with a band
between the storeys. The roof is late C16 or early C17 and is
steeply pitched and plain tiled. Both stacks at West and East
gable ends date from the time of the conversion to a house. The
one at the East end with grouped shafts probably retains its
original brickwork whilst that at the West end has probably been
rebuilt. The present plan is that of a post medieval house with
a hall and service and parlour ends. Between the hall and
service bays is a narrow stair and entry bay. Two storeys and
attics. At the West gable end, first floor, there is an intact
C13 lancet window with splayed reveals and coursed clunch ashlar
quoins, and a recently exposed (c1980) larger window opening
with brick voussoirs to a two centred arch. At the East end
there are three C13 larger lancets with similar quoins and
splays, but the arches and heads of the windows were replaced,
c1600. The fenestration of the South wall is C20, except for a
late C16 or early C17 three-light window with chamfered
mullions, to a closet. There is no evidence as to the location
of the doorway to the chapel, the present doorway dates from the
time of the conversion to a house. Inside. All the internal
partition walls are timber-framed with short, deeply incised
carpenters marks to the studs. The upper flights of the
staircase are original and retain the newel posts with concave
finials, the moulded rail and blocked balustrading. At ground
floor there are two doorway openings from the hall to the stair
or entry bay, one of which is original. There are abutting
hearths to the hall and parlour. An upper room over the service
end has an original fireplace obscuring the central of the three
C13 East windows. There is an original closet leading off this
room. The main beams are stop chamfered. The roof is of butt
purlin construction in line, with straight wind bracing to each
bay between the principal rafters and the purlin.