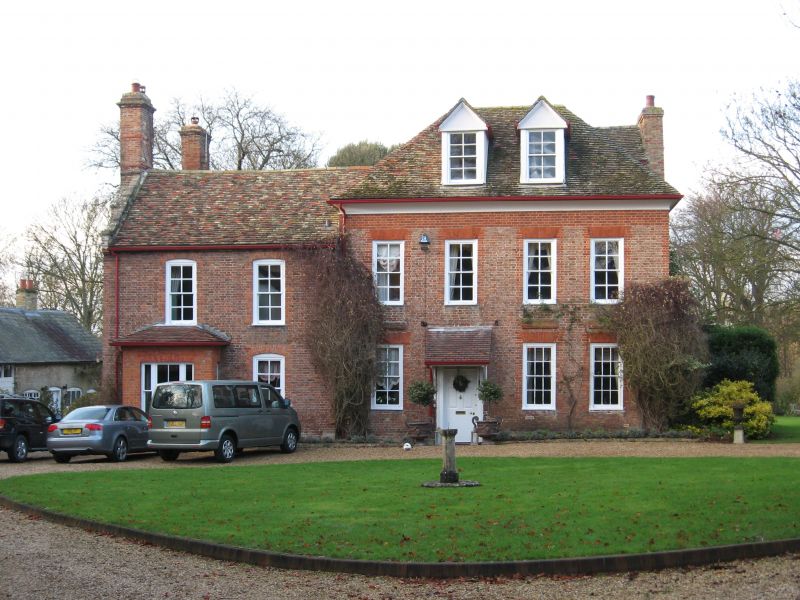 House, formerly the vicarage, built in two sections by Dr Peter
Allix whilst he was vicar of Swaffham Prior from 1712-53.
Principal range of pink brick on a sill, with red brick
dressings and details. The thickness of the walls suggests that
the brick is a casing to a clunch core. Steeply pitched hipped
roof, raised by approximately one foot and the eaves coved
c1900. Plain tiled. The right hand gable end has a projecting
stack which has been enlarged to accommodate the flue for an
additional hearth in an upstairs room. Double pile plan. Two
storeys, attics and cellars. Two c1900 gable dormers. The main
elevation is in four window bays with an off-centre doorway.
The facade is framed by red brick rusticated quoins and divided
by short lengths of moulded banding between the storeys and
above each of the ground floor windows. Flat arches of gauged
red brick to four original hung sashes of eight panes each with
ovolo moulded glazing bars. The surrounds of the windows have
rustication in similar red brick. At ground floor, one similar
window and two later hung sashes of twelve panes each in
original openings. The door is also contemporary, with raised
and fielded panels but the lean-to porch roof on brackets is
c1900. The rear wall has segmental arches to three flush frame
hung sashes of twelve panes each. The service wing to the left
hand is of a similar date and also of clunch, cased on front and
rear walls in the'same pink brick with red brick dressings and
details, but the gable end wall has not been cased. The ridges
and eaves lines of the two parallel, linked gable roofs are at a
lower height than that of the principal range. There is a
dentil eaves cornice and restored gable end parapet on
kneelers. End stacks with typical late C17 or early C18
projecting capping. Two storeys and cellar. Four similar eight
pane hung sashes also with original ovolo mullion glazing bars,
but in segmental arches. The bay window is late C19. Inside.
One large room has intact raised and fielded panelling with a
bolection moulded dado rail. The doors are also panelled and
the fireplace has an eared surround contemporary with the early
C18 panelling. The staircase is a good example of its period.
It is of four flights with a closed-string, square newel posts
and turned balusters in the form of urns. The first floor rooms
have doorways with round headed arches in square heads. The
moulded cornice of the heads is linked to the arch by a raised
key block. Other original details include doors with H and L
hinges. One cellar is brick lined, and one of the bricks is
reputed to be incised with the date 1721.