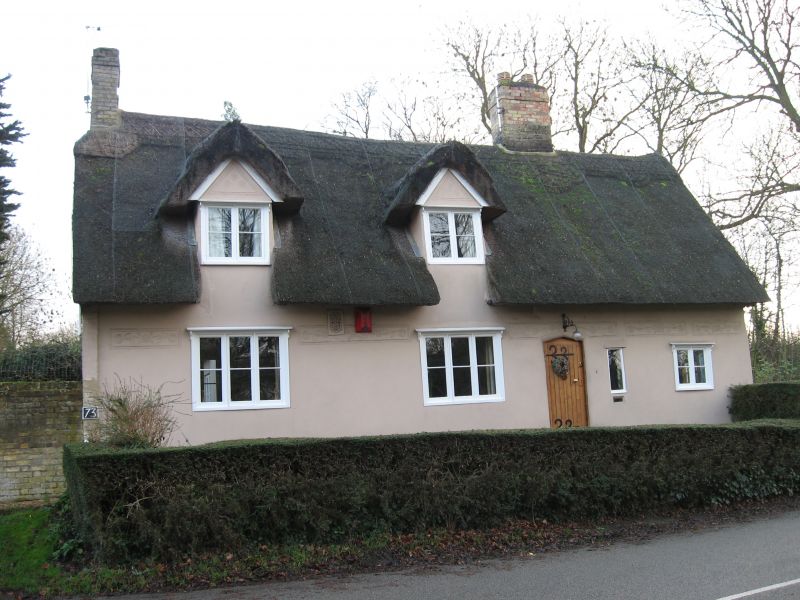 Cottage, early C16. Timber-framed plaster rendered with left
hand gable end cased in gault brick in C19. Thatched roof of
longstraw with a gault brick ridge stack. Plan of three bays
and narrower firebay, but with original entry to a cross-passage
at low end of the hall. Converted to lobby entry plan. One
storey and attics. Two later gabled dormers. The three windows
and the door are all C20, but more or less on the site of the
original. At the rear there are the original lintels to the
rear doorway to the cross-passage and two windows, one to the
hall and another to the service end. This window and another in
the front wall of what was probably the parlour both had diamond
mullions. The framing in the rear wall has been exposed.
Inside. Stop chamfered ceiling beams with joists laid flat and
unmoulded. The partition wall between the hall and service bay
has been removed. The inglenook hearth is of clunch and brick,
which has been restored. The jambs of the hearth have cyma
moulding and stops. The framing in the left hand gable end has
been retained and is exposed to show cranked bracing similar to
that found in the crown-post roof of Linton House, High Street,
Swaffham Bulbeck and the wall bracing at the barn, Downing Farm,
Swaffham Bulbeck (q.v.). The ceiling of the hall is carried on
chamfered clamps pegged to the studs.