A Grade I Listed Building in Bottisham, Cambridgeshire 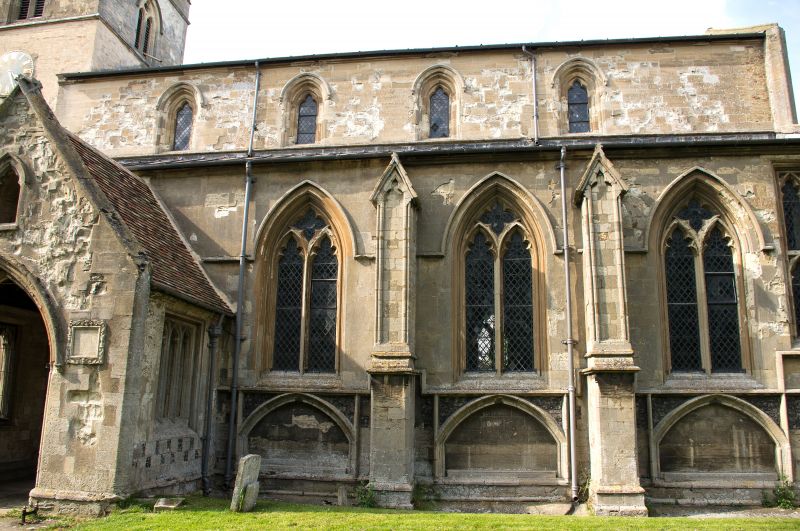 Parish church. The early C13 chancel, West tower and West porch
survive from an earlier church on the site but in the early C14
the nave and aisles were rebuilt. The exterior of the church,
including the tracery was extensively repaired and restored in
C19 and C20. It is built of clunch and limestone, but there is
some original flint in the West porch. Embattled West tower of
two stages with crocketted finials at corners. Set-back
buttresses. Original lancet windows at first stage. West
porch, also early C13, with gabled roof, now slated. Two
storeys. Gable end has a two-centred arch to a blind recess
with a badly worn blank niche above a window to a parish room.
West doorway in a two centred arch of two chamfered orders, the
outer arch on a nook shaft with annulet ring, bell shaped
capital and holdwater base. Nave, each side of clerestory has
four early C14 windows of a single trefoil light in a
two-centred arch. The splays have wave and hollow moulding.
The South aisle, also C14 and with six windows, all restored.
Below the sills are a series of recesses possibly for tombs, in
pointed arches, divided by C14 two-stage, gabled buttresses.
The South porch is contemporary with the aisle. There is some
flushwork in the side aisles. The inner and outer arches are
two-centred and of continuous wave moulded orders, divided by a
hollow moulding. The chancel, although C13, has been rendered
and the fenestration restored. Inside the church, the king post
roof truss of the West porch is original. The staircase to the
parish room, c1670, is closed-string with flat section balusters
and square newel post with faceted ball finial. The openings
from the tower to the nave and porch are all early C13, and of
two chamfered orders in two centred arches. The gable end of
the early C13 nave roof is visible in the West end of the nave.
The present seven bay roof is of crown-post construction and
late medieval in date. Nave arcade in five bays. Two centred
arches of two wave and hollow moulded orders on quatrefoil piers
with moulded capitals and bases. The filleted foils have keeled
minor shafts between them. In the chancel there is a double
piscina, early C13, in two bays divided by a colonette with
moulded capital and base. The three seat sedilia had similar
colonettes. In the South aisle there is an early C14 piscina
and sedilia. Between the nave and chancel is a C15 screen of
clunch and limestone, restored in parts. In three bays, each
with two centre arches in square head with quatrefoils to
spandrels. There is a dado with closed panels and below each
side bay an arcade of four two centred arches. The North and
South aisles both have oak screens of C15, reset and altered.
In North aisle, late C16 or early C17 wall monument of clunch,
painted to Thomas Pledger, 1599, and Margaret, his wife, 1598.
Also in North aisle black and white marble wall monument to
Leonellus and Dorothea Allington, children of William and
Elizabeth Allington. 1638. Attributed to W. Wright.
In South.aisle to Sir Roger Jenyns, 1740 and Elizabeth, his
wife, 1728. Fine white and grey marble standing wall monument.
Also in South aisle wall monument: Soame Jenyns, 1787 and his
wives Mary and Elizabeth, 1796, white marble signed J Bacon.
R.A. Sculptor, 1796. Reset in South wall of South aisle is a
stone panel, painted with figure of child and recording gift of
school by Sir Roger Jenyns in 1730.