A Grade I Listed Building in Wimpole, Cambridgeshire 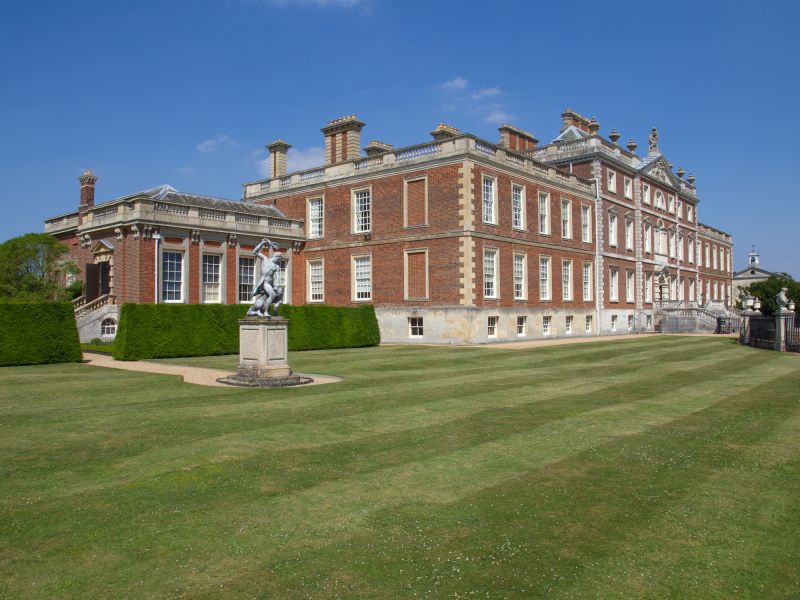 Mansion House. Mainly C18, but C17 origins and mid C19 additions and
alterations. Architects who are known to have been involved with designs for
the house are James Gibbs, Henry Flitcroft, Sir John Soane, and Henry Kendall.
Craftsmen who are recorded as having worked here include Giuseppe Artari,
plasterer; Jefferson Alkin, carver, responsible for a number of the marble
fireplaces; John Ratford, carpenter and, in the C19, John Papworth, plasterer.
Red brick and limestone dressings. Main block has two parallel and adjoining
ranges of slate roofs, hipped. The symmetrically disposed ridge stacks are
C19, of three bays divided by rusticated pilasters and supported by scrolls at
the ends. Plan of double pile centre block with flanking east-west wings and
further additions to north west and north east. Symmetrical south front,
remodelled 1742 by Henry Flitcroft, of seven bays with flanking wings of five
bays each. Centre block of basement and three storeys framed by balustrade,
modillion eaves cornice and rusticated quoins and divided by plain plat bands
between the storeys. Pediment to slightly projecting three centre bays with
the achievement of arms of Baron Hardwicke and his wife to the tympanum.
Double staircase of brick with limestone arches U-shaped in plan and of two
flights with landing and a platform carried on an arch with rusticated front.
Closed string square newels and turned balusters. Two of the newels have C19
gas lamp holders with foliate enrichments. Pedimented and rusticated stone
doorcase with pulvinated frieze, a venetian window at first floor and a
lunette window to the second storey. Fenestration of twelve pane hung sashes
in raised stone surrounds. The first floor windows are pedimented and have
brackets to the sills. The second storey windows are of six panes only. The
east wing is the chapel by James Gibbs. Basement and two storeys with a
parapet and rusticated quoins. Similar window openings with eighteen pane
hung sashes. The west wing has C19 twelve pane hung sashes at first floor.
The west front of the book room by Sir John Soane was remodelled by Henry
Kendall in C19. Symmetrical north front. Seven bay centre block with five
bay flanking wings. Forecourt enclosure formed by library on north west and
wing on north east. Centre block parapetted with modillion eaves cornice,
plat bands and rusticated quoins. Basement and three storeys. The canted
centre bay is mid C18 whereas the wall and fenestration are late C17 or early
C18. The flanking wings have basements and two storeys. Ranges of eighteen
pane hung sashes except for those in the east wing which are of twelve panes.
The library wing to the north west, circa 1720 by James Gibbs, was altered in
late C18, and C19. Slate roof, hipped and parapetted. Five window bays to
the east wall. Eighteen pane hung sashes in raised surrounds with blind
recesses above. At the north end a full height bow window of 1754. The north
east wing repeats the elevations of the library wing and although C18 in
origin is now almost entirely mid C19. The entrance from the north front to
the domestic courtyard is also mid C19. Interior: Many of the rooms on the
two principal floor are elaborately decorated with mid C18 panelling probably
at the time of Henry Flitcroft's remodelling. There are a number of
fireplaces in white marble by Alkin with wooden overmantels. The interiors of
the saloon, gallery and dining room are fairly complete examples of this
period. Some of the ceilings are mid-C19 by Kendall (e.g. red drawing-room).
The chapel in the east wing has panelling of early C18 and a galleried west
end on Ionic columns. Continuous wall paintings in trompe l'oeil are by Sir
James Thornhill. North and South walls have Doctors of the church flanked by
Corinthian columns. East wall an Adoration of the Magi. Coffered ceiling.
Wrought-iron communion rail, bulbiform pulpit, elaborate gilded altar with
white marble top. Main staircase possibly also by Gibbs with skylight by
Soane when the stairlight in east wall was blocked in late C18. The library
is by Gibbs altered in late C18 and early C19 but the ceiling is atrributed to
Isaac Mansfield. An ante room to the library also by Gibbs was extended to
the west and remodelled by Soane. The yellow drawing-room, rising through two
storeys, domed and top lit is by Soane (1793) with pendentive paintings by
R W Buss (d.1875). Adjoining is Soane's secondary staircase of five flights.
The bath house also by Soane was added late C18 or early C19. It has an
arcaded vestibule with a fireplace and two flights of steps leading to
platform in which is the bath. This has shaped ends and is tiled. The eating
room in the east wing of the north front has a plaster ceiling of mid C19
probably by Kendall. At first floor: The decoration is again of mid C18 with
alterations to a north-south gallery by Soane. He also designed the
semi-circular dressing room on the south front which has an original fireplace
incorporating earlier material and painted tile surround. The centre block
was begun c.1640 for Sir Thomas Chicheley. Successive owners were the Earl of
Radnor (1689-1710), Duke of Newcastle (1710-11), Earl of Oxford (1711-40),
Philip Yorke later first Earl of Hardwicke and his descendants (1741-1897);
Lord Robartes (1893-1934); Capt. and Mrs Bainbridge (1934-1976). Mrs
Bainbridge was the eldest daughter of Rudyard Kipling. (A more detailed
description of the house appears in R.C.H.M. West Cambs Mon (2)).