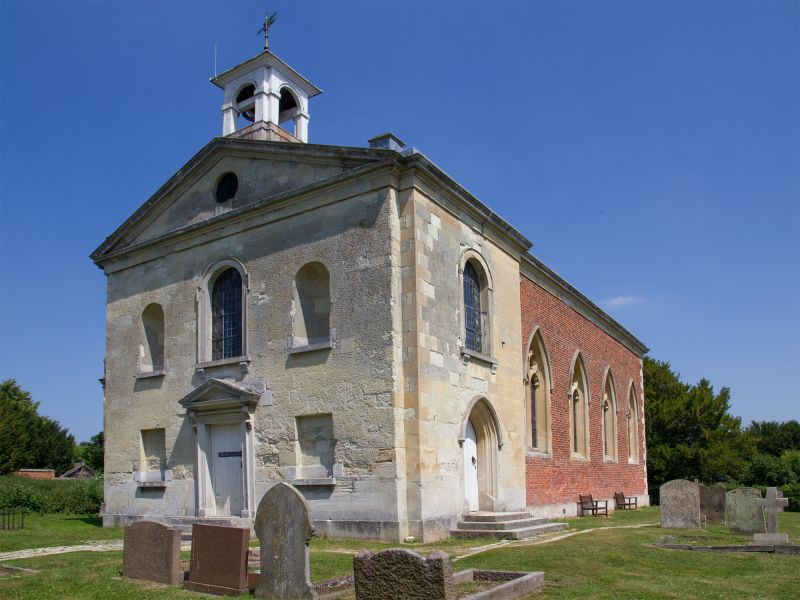 Parish church. C14 north chapel remains from the medieval church on the site
which was replaced in 1749 by the present building designed by Henry
Flitcroft. Restoration of 1887 involved the gothicizing of the south front.
Red brick, limestone dressings but the west end nearest the house is of clunch
ashlar with limestone ashlar to lower courses. Parapetted roofs with moulded
main cornice. Plan of nave and chancel under single roof and north chapel.
North chapel has one C14 window of clunch. Two lights with reticulated
tracery in two centred arch. The rest of the windows date from 1887
restoration, except for those at the west end which were remodelled in 1732.
Pedimented symmetrical west gable end in two stages with bulls eye window to
the tympanum. Pedimented central doorway on console brackets with moulded
doorcase. Two flanking blind window recesses and above a round headed arch to
the west window in raised and eared architrave flanked by round headed niches.
South doorway remodelled 1887 in two moulded continuous orders and above a
window of 1749, in a round headed arch. The rest of the fenestration in the
south wall is 1887. The east end is pedimented and has a bulls eye opening to
the tympanum. Inside: West gallery and organ chamber have symmetrically
turned balusters to the balustrade divided into three bays by two Ionic
columns of wood. At the east end, the rear surround of the Venetian window is
in three bays divided by pilasters on high base. The centre bay is scrolled
and pedimented and the whole is enriched with garlands and drops of foliage.
Mid C18 altar table and wrought-iron communion rail. Monuments to members of
Yorke family in nave and north chapel. They include in the nave a panel to
Rt. Hon. Charles Philip Yorke (1834) and Harriet (1854) his wife, by Thomas
Denman (R Gunnis); on south wall of nave to Hon. Agneta Yorke (1820), white
marble tablet with medallion portrait and figures of husband and sons, by J
Flaxman. In north chapel the monuments include one of early-mid C17 reset mid
C18, to Sir Thomas Chicheley (1616), and his wife and children. Two stage
altar tombs of alabaster with effigy and miniatures effigies to lower stage.
Against east wall: Philip, first Earl of Hardwicke (1764) and his wife
Margaret (1761). Large wall monument of marble with inscription tablet,
sarcophagus and grey obelisk. Flanking female allegorical figures include
Athene and below playing putti on the base. By James Stuart. On the north
wall : Catharine (1759) wife of Hon. Charles Yorke, white and brown marble,
by James Stuart. : Hon. Charles Yorke (1770) and his wives Catherine and
Agneta. Grey marble obelisk with inscription tablet and putti. By
P Scheemaker. West wall: Philip, 2nd Earl of Hardwicke (1790). By T Banks;
Hon. John Yorke, 1801, by R Westmacott. Centre of chapel. White marble tomb
chest with shaped ends. Philip, 3rd Earl of Hardwicke (1834) and his wife
Elizabeth, by R Westmacott junr. Brass on south wall of chapel: Edward March
(1625) parson of Wimpole, and his wife.