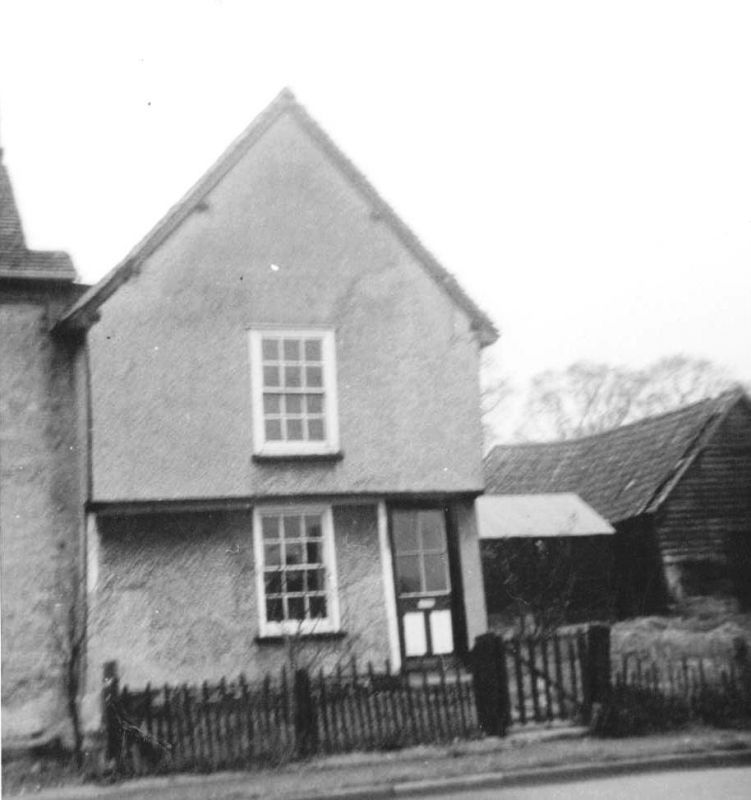 House. Probably late C16 origin, but mid C17 crosswing, and C19 main range.
Renovated and extended late C20. Timber framed, rendered and tiled roofs.
mid-late C17 red brick and clunch stack between main range and crosswing.
Two storeys. Crosswing originally jettied at both south and north ends. The
north end jetty has been removed and the wing extended, late C20. The jetty
on the front has shaped brackets but is otherwise obscured. Late C20
fenestration to one window opening at each storey and to the east wall.
However in the west wall of the crosswing there are ovolo moulded mullions to
an original window opening. Two, three-light windows with larger lights and
unmoulded mullions are on the first floor of the east wall. Window of two
lights in west wall, at the rear. Now partly obscured. C19 main range is a
rebuild of the original hall. Brick, painted and tiled. Two storeys.
Doorway, inserted opposite the stack. Rear gable stairturret and possible
garderobe between main range and crosswing. Framed, rendered and tiled.
Interior: Part of the chimney breast of the late C16 house is visible from
the roof. The chimney was widened and rebuilt later in C17 when the
crosswing was added. The hearths are of clunch and red brick. Roofs have
been mostly rebuilt, including that of the crosswing although a pair of
rafters remains. Clasped side purlin roof. Arch braced ties and jowled
posts to first floor chamber. Smaller hearth to this room. Framing of
varied scantling, and generally typical of later C17. Original roof over
stair turret.