The Pier, Including the Tollhouse

A Grade I Listed Building in Clevedon, North Somerset 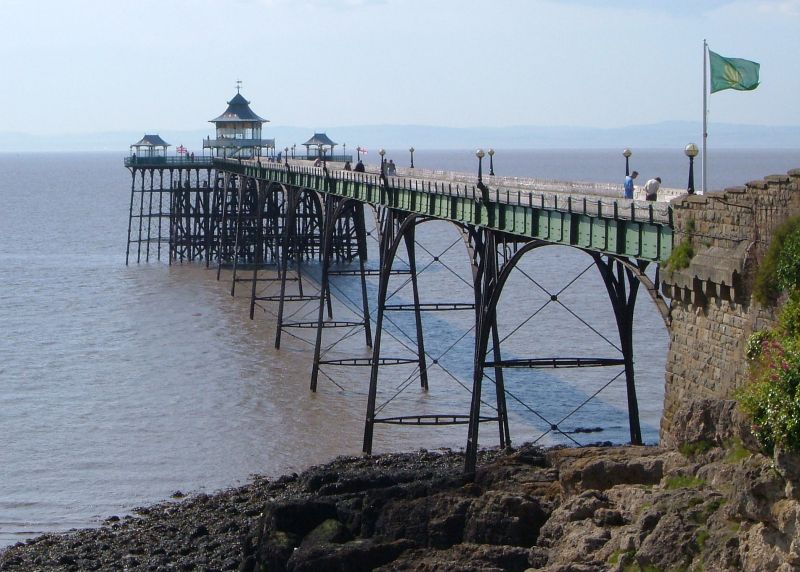 Entry Name: The Pier, Including the Tollhouse

Pier with attached toll house. 1867-69 with alterations of 1892-4; extensively conserved 1988-1999. John William Grover (1836-92) and Richard Ward (1817-81), engineers, Hans Price, architect. Wrought and cast iron structure and shelters; toll house of rough-faced sandstone, roof hidden by parapet.
DESCRIPTION: pier consists of eight 100 ft arched spans leading to a landing stage. The exceptionally slender spans are constructed from riveted broad-gauge railway track as designed by W.H. Barlow for the Great Western Railway. Each span is arched, with radiating struts; each span is carried on a pair of arched stanchions, tension-braced with diagonal tie-rods and cross-members. Ornamental lamps on tapering stems are placed over each of the supports. Those on the south side bear the names of the engineers, the date 1868 and the foundry mark of 'Hamilton & Windsor Ironworks Liverpool Contractor'; those on north side have been renewed. Wooden planks and back rest to benches running the full length of the pier now sport legion brass plaques to contributors towards restoration. Pier head at north-west end is substantially wider than the pier, and is supported by cast iron columns (replacing earlier wooden structure). It has three cast iron and glass shelters, the central one of two storeys comprising a pagoda-roofed super-structure over the steps to the landing stage below; cast iron stair leads to room at first floor level with outer walkway carried on columns; convex roof terminates with a weathervane. The ornamental cast iron structures, incorporating anchor motifs to the cresting at eaves level, bear the foundry mark of McDowell Steven & Co, Glasgow.
DESCRIPTION OF TOLL HOUSE: Scottish baronial in style. Narrow rectangular plan with tower and projecting spur to south side, standing on raised rock-faced foundation. Mainly two-light windows with stone transoms. Entrances on north side within moulded frames, the landward one with a pyramidal slate-tiled roof, that nearest the pier beneath a corbelled stack; roll moulded strings at first floor and eaves levels; castellated parapet. Interior: much altered, now used as a shop and gallery. Originally built as the toll keeper's house.
ANCILLARY FEATURES: wrought iron gates set between ornamental cast iron piers with globe lanterns and twisted bases; side gateways; run of railings on north side on stone kerb.
HISTORY: erected for the Clevedon Pier Company, this pier was opened on Easter Monday 1869 and intended to serve steamers bound for South Wales. The opening of the Severn Tunnel in 1886 reduced this traffic, but the aggrandisement of the pier head was proceeded with nonetheless. The pier's outermost two spans collapsed during routine testing in 1970, leaving the pierhead and structures marooned. Having survived an attempt to demolish the pier, it was saved by a dedicated trust and finally re-opened in toto, after near-total dismantling, in 1999, when the project was awarded a Civic Trust award. Niall Phillips was architect for the Clevedon Pier and Heritage Trust. This pier is of outstanding importance for its delicate engineering and the relationship of pier to landward buildings, which creates an exceptionally picturesque ensemble.

The pier and toll house, together with the Royal Pier Hotel, the Fountain and Nos.19 and 20 Alexandra Road, form a group.