A Grade I Listed Building in Stourton with Gasper, Wiltshire 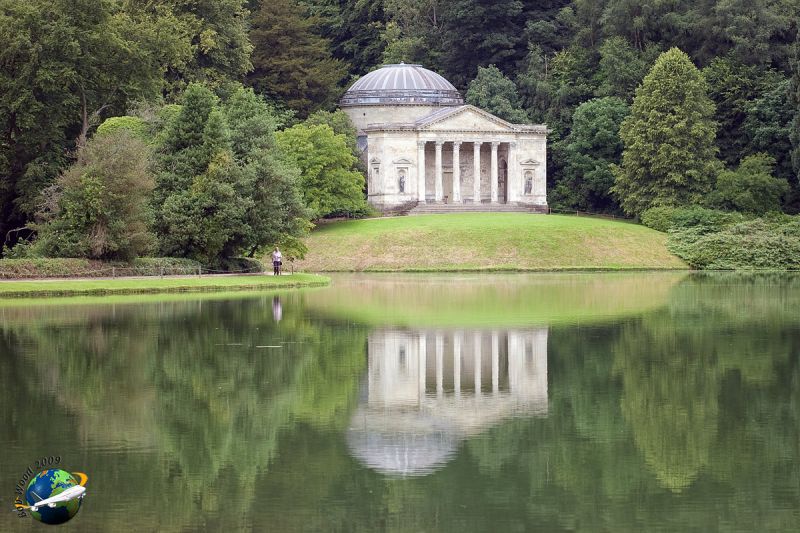 STOURTON WITH GASPER STOURHEAD GARDENS
ST 73 SE
(west side)
6/153 The Pantheon
6.1.66
GV I
Temple. 1753-54 by Henry Flitcroft for Henry Hoare. Limestone
ashlar. Tetrastyle in antis Corinthian portico, six step
stylobate, flanking semi-circular niches in eared architraves with
pediments, containing lead statues of Bacchus and Venus Callipygos,
probably by John Cheere, modillioned entablature and pediment.
Right returns have empty pedimented niches. Rear of portico
narrows to vestibule with blind external walls, octagonal temple to
rear with blind walls, drum to lead dome, rear wall retains
roofline and corbelled stack of former room containing a stove
from which warm air passed into the temple through a grille.
Portico interior has double doors with six fielded panels in
moulded architrave with pediment leading to vestibule. Vestibule
has semi-circular niches with urns on pedestals, groin vaulted
ceiling, 2 steps up to wrought iron gates by Benjamin Smith of
Westminster in semi-circular arched opening leading to temple.
Circular temple interior has coffered ceiling with frieze of
bucrania and garlands, modillioned cornice, dome top-lit by stained
glass circular window. Walls lined with seven egg and dart moulded
niches, the one opposite the entrance contains Rysbrack's famous
statue of Hercules, 1747, to the left is Rysbrack's Flora, lead
statue of Diana and St Susanna. To the right of Hercules is an
antique marble statue of Livia Augusta as Ceres, Meleager by John
Cheere and Isis, the latter two are plaster. Above the niches and
door are eight plaster relief panels of classical scenes by
Benjamin Carter. The Pantheon was originally called the Temple of
Hercules; it was built for Rysbrack's statue. It is probably the
most important element in the Gardens, providing a focus for vistas
across the lake from different points.
(K. Woodbridge, The Stourhead Landscape, 1982; R. Gunnis, A
Dictionary of British Sculptors, 1951)