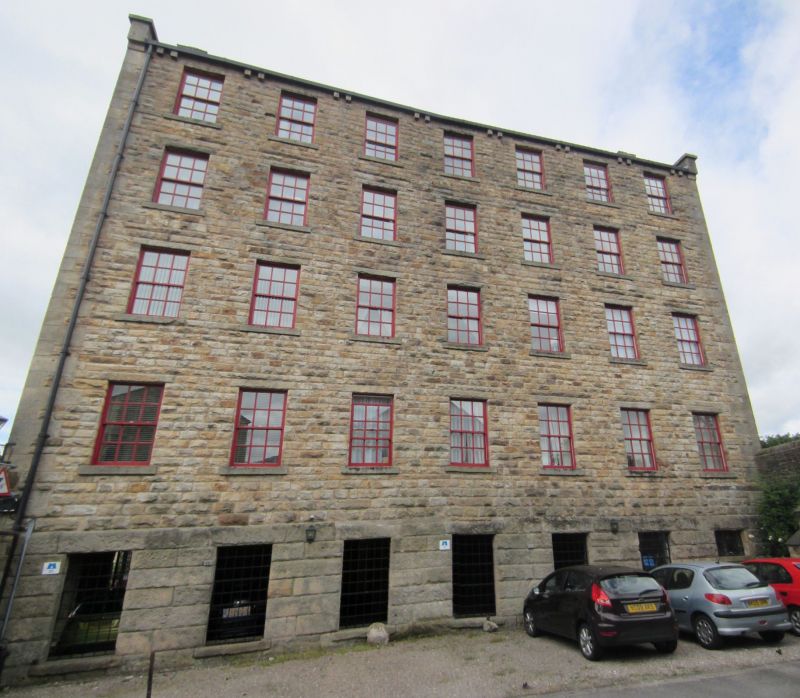 Former steam-powered corn mill and mill chimney built 1847, converted to paper milling in the C20 and into residential apartments 1988-90.

PLAN: the mill has been reordered internally and subdivided with inserted partitions to form modern apartments.

EXTERIOR: a parallel pair of four-bay wide, gabled ranges forming a single block with an H plan roof. This main block is of five storeys and attic, seven bays deep. Attached to the west side there is a single-bay, lean-to extension of four storeys, this having a tall round arched window opening facing the canal to the north suggesting that it was originally the engine house. Rising from the ridge line junctions forming the H plan roof are two squat chimney stacks lacking pots. The gable ends of the main block are raised and coped and have broad, thin, corniced chimney stacks without chimney pots that rise from the central pair of bays to each gable. The north gable stacks facing the canal project slightly and are quoined, these projections having a central taking-in door to each floor flanked by windows. The southern gables carry inscriptions at their peaks “WW” and “1847”, with window openings to the second and seventh bays being enlarged into doorways leading to small balconies. Window openings are regular and unadorned, and have replacement joinery to all but the ground floor. Ground floor windows retain original iron framed multi-paned windows that are no longer glazed, but now act as security grills to the ground floor car park. Access to the car park is via two inserted stone-built archways. Access to the apartments is via a modern bridge leading to the centre of the south elevation at first floor level.

INTERIOR: this has been reordered and subdivided to form residential apartments with car parking on the ground floor. A number of cast iron pillars and exposed timber beams have been retained both within shared circulation spaces and within individual apartments. The attic apartments, which are largely open plan, retain exposed original roof timbers, both purlins and attic trusses. These features are included within the listing.

Pursuant to s.1 (5A) of the Planning (Listed Buildings and Conservation Areas) Act 1990 (‘the Act’) it is declared that the modern inserted stud partitions, staircases and fittings of the residential apartments and shared circulation spaces are not of special architectural or historic interest.

SUBSIDIARY ITEM: the detached mill chimney is sited adjacent to the canal tow-path to the west of the mill. This is also of rock-faced stone ashlar, being of octagonal cross section, rising from a square base. The chimney rises to at least 4m higher than the mill.

Victoria Mill was built on the side of the Leeds and Liverpool Canal in 1847 for William Wilkinson and is marked on the First Edition Ordnance Survey map (1854) as a corn mill. It was steam powered and is thought to have produced flour and animal feed, as well as supplying the brewery trade. The mill was still marked as a corn mill in 1909, but by 1938 it had been converted into a paper mill which was operated by Thomas Lamb and Co. Ltd in 1968. Disused by the 1980s, the mill was converted into apartments in 1988-90 as part of a housing scheme designed by the local architects Wales, Wales and Rawson which won a National Housing Design Award in 1997.

Victoria Mill and associated mill chimney are listed at Grade II for the following principal reasons:

* Industrial architecture: the substantial massing of the building, with its very regular window openings and prominent chimney stacks, together with the survival of the tall mill chimney represents a very good and increasingly rare surviving example of mid-C19 industrial architecture;
* Historical: as a surviving marker of Skipton’s industrialisation in the C19 closely associated with the adjacent Leeds and Liverpool canal.