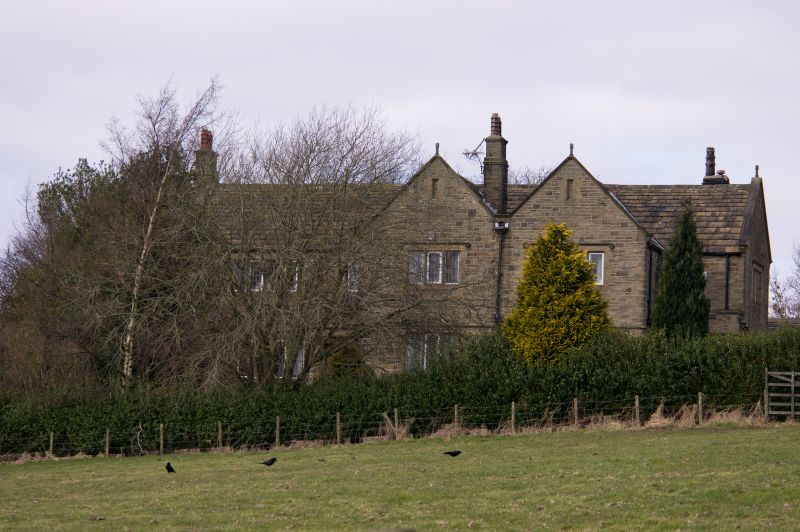 House, now 2 houses. 1614 -20 for John Coates, enlarged to rear and chimney
added in C17- C18 and divided into two properties probably late C19, when
alterations were made to south front. Gritstone blocks and rubble,
graduated stone slate roof. Quoins. 2½ storeys, 3 bays with large 2-bay
west wing, shorter l-bay east wing and a central stair turret to rear.
South facade: bay 1, tall 4-light C19 chamfered mullion window to ground
and first floor. Bays 2 and 3: on left single-storey open porch with
chamfered opening, deep moulded cornice and balustrade with roll-moulded
parapet supported by squat moulded balusters; within the porch stone
benches and mid C17 board door with applied studded bands. Another board
door, left of centre, in surround with sawn stone jambs and Tudor-style
lintel flanked by a 3-and 4-light mullioned window, both restored.
Recessed chamfered mullion windows of 3, 2 and 4 lights to first floor;
gable window, bay 3, of 3 stepped lights with hoodmould. Blocked first-
floor doorway above the porch, bay 2, the much altered gable above having a
chimney at the apex, the quoins of which are visible below, in the wall
face. Gable chimney ind end stacks are C18, corniced, with 2 or 3 flues
each. Interior: the division of the house into 2 properties is to the
right of the gable chimney stack; the porch entrance bay 1 and the rear
west wing form Grange Hall; bay 3, the rear stair and east wing are Grange
Hall Cottage. Grange Hall: a straight flight of stairs rises inside the
entrance, with living room to left. A C17 stair with remains of splat
balusters to the north end of the rear wing; on the first floor a post and
panel partition below a massive tie beam; panelled doors with original
fittings. Grange Hall Cottage: the front door opens into a large room,
formerly divided by a partition along the western ceiling beam. C17
panelling and overmantle to east gable fireplace and the south-west corner
fireplace. A thin partition wall divides the left end of the room from the
rear staircase of 4 straight flights with bulbous turned newels and
balusters. A blocked mullioned window in the wall between front room and
rear east wing. First floor right: fine early -mid C17 deeply moulded
strapwork to the curved plaster ceiling, relief of vine scrolls in the
tympanum. Panelled doors with original fittings. History: Kildwick was a
grange of Bolton Abbey by the C14 when building work was in progress on the
bridge and the church (q.v.) The grange farm was the principal manorial
settlement and at the Dissolution (1539) it was divided between 2
speculators, Robert Wilkinson of Bradford and Thomas Drake of Halifax.
In the mid C16 Drake sold his share to John Garforth of Farnhill and
shortly afterwards it became the property of Henry Currer. It is likely
that Robert Wilkinson passed his share, with Grange Hall, to the Coates
family c1573. Deeds record the construction of the house by John Coates.
Roger Coates, a staunch puritan persecuted at the Restoration, died in 1660
and was recorded 'of Kildwick Grange', on his tombstone. The inventory of
another John Coates (1708) survives, and it appears to include all the
existing building, with rear wings. The C18 history is linked with the
Netherwood family, the corner fireplaces and end stacks are of this date.
C19 alterations include the south front gables and refenestration together
with the division of the property into 2 dwellings. Bradford Metropolitan
Council, Kildwick Grange Conservation Area, 1975. Yorkshire Buildings
Study Group, Report No. 590, 1979.