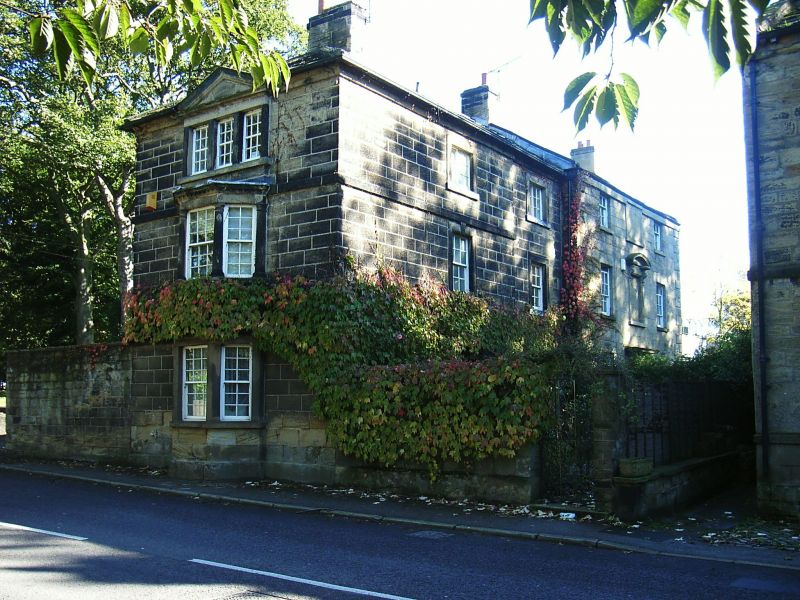 House, now 2 dwellings. Later C18, altered and enlarged in C19. Coursed
squared sandstone, slate roof. Gable to road. Shallow double-depth
rectangular plan formed by 3-unit main range with set-back wing at left end,
and an addition to this. All 3 storeys; the principal element (No 132), of
3 bays, symmetrical (now painted white), has raised quoins, a central doorway
with reeded architrave and small cornice, above this a blind (or blocked)
window with moulded architrave and open segmental pediment on consoles, 12-
pane sashed windows at ground and 1st floors, 9-pane sashes at 2nd floor
except in the centre which is a blind window with raised surround; moulded
cornice, coped gables and gable chimneys. The slightly set-back one-bay
wing, (now part of No 130), of 3 storeys at a slightly lower level, has a
ground-floor window in an altered round-headed opening with stepped voussoirs
and imposts, a 12-pane sash at 1st floor and 9-pane sash at 2nd floor, both
with raised surrounds. Breaking forwards slightly to the left of a vertical
joint, the addition has bands on 2 levels, a doorway and side windows with
raised plain surrounds, and a pediment over the door; at 1st floor a 12-pane
sashed window with raised sill on scrolled brackets and raised plain surround
with keystone; at 2nd floor a square window with similar surround; moulded
eaves cornice, hipped roof with ridge chimney. The left return wall has
bands carried across a 2-storey canted bay, and tripartite windows on all
floors, that at 1st floor with Tuscan columnar mullions and that at 2nd floor
breaking forwards slightly and pedimented. Rear of No 132 has a relocated
lintel dated 1744. Attached at right-hand end of No. 132 is a single-storey
flat-roofed extension which perhaps replaced a former right-wing, and is not
of special interest.
Interior: No. 130 has a parlour fireplace with a hob grate, reeded surround
and architrave with a raised panel on the frieze and a moulded cornice; and
in the same room a built-in bookcase with matching architrave.