A Grade I Listed Building in Peckforton, Cheshire East 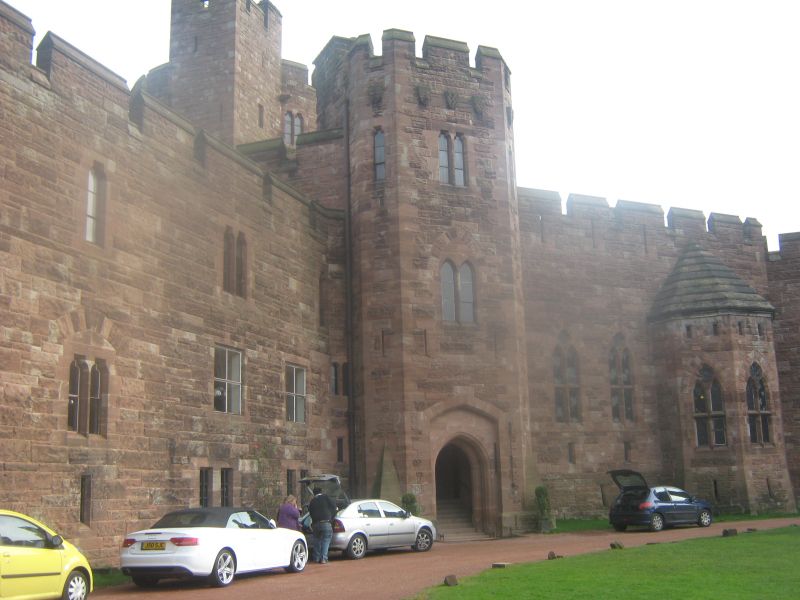 Castle. 1844-50, by Anthony Salvin for Sir John Tollemache MP.
Rock-faced red sandstone with lead, asphalt and tile roofs. Mainly 3
storeys with one tower 5 storeys high, all arranged around a ward,
with the principal accommodation on the north side. The castle has a
dry moat, bridged at the gatehouse. The gatehouse has a
triple-chamfered giant arch, above the gateway arch, a pair of oak
Gothic headed studded doors, shouldered lintels to doors and windows,
gate towers and battlements. The buildings at the west side of the
inner ward are the stables, coach house, the rectangular bell tower
together with the kitchens and service area. East of the entrance is
the chapel (qv) and north is the Great Hall range of 18 bays with the
entrance porch, set forward, approached up steps and with Gothic
headed arch. The Hall has cross windows with trefoil heads and small
trefoil lights in the gothic heads and a polygonal oriel window
whereas the service and bedroom wing (west) and Long Gallery wing
(east) mainly have two-light windows with shouldered lintels. The
large circular main tower is behind the Hall entrance and the
octagonal Library tower is at the east end of the gallery wing. The
outer walls of the castle have full height slender turrets or
bartizans at changes in direction and there are corbel tables
supporting part of the battlements; arrow slots, and even a gatehouse
garderobe. The roof is mainly flat, of asphalt, concealed by the
crenellated parapet. The single-storey coach house makes early use of
timber lattice roof trusses.
Interior: The Porch leads to a screens passage with oak screen, in
early Gothic style, and matching gallery rail above. The Great Hall
has Minton Tile floor, large stone chimney piece and stone
quadripartite ribbed vault supported by corbels with shields. The
Long Gallery, (east) has oak panelling 1.8m high, a chimney piece in a
wide arched recess, and a ceiling panelled by three longitudinal and
six cross beams. The Long Gallery gives access to an irregular shaped
Billiard Room with beamed ceiling (north) and the octagonal (tower).
Library with oak linenfold bookcases (east) The Drawing Room (north)
has an oak boarded floor, a wide stone fireplace. Gothic-headed door
with ornamental strap hinges, plastered walls and beamed ceiling. The
main staircase is behind the Hall. It has a light well pierced by
shouldered-linteled openings vertically and horizontally in pairs.
The circular tower, at the north-west corner, contains the octagonal
Dining Room with Minton tile floor, two fireplaces, and vault of eight
radial ribs running to a central boss. The room contains an Oak
sideboard with carved "green men". Below the Dining Room the Wine
Cellar is a circular tunnel vault from a short round pier. The
Kitchens and Service rooms are south and west of this tower,
extensive, unaltered and disused. The first floor nursery area has
plastered walls with cornices, square-headed cross-braced oak doors
with ornamental strap hinges and some plastered barrel-vaulted
ceilings. The first floor gallery is above the Long Gallery and very
similar in arrangement. The Racket Room at fifth floor level in the
round tower, approached up a stone spiral staircase, has a boarded
ceiling and originally had it's walls lined with boards. The root of
this tower room is covered with block lead. The upper ceilings of the
Bell Tower and Gatehouse are barrel-vaulted.
The Castle can be regarded as a great Romantic house or as the last
serious fortified home built in England, created as a refuge from the
social disturbances of its time. Designed on a great scale with
consummate skill, it was executed to the highest standards and is one
of the great buildings of its age.
Dr Jill Allibone Anthony Salvin (forthcoming).