A Grade I Listed Building in Hampstead Norreys, West Berkshire 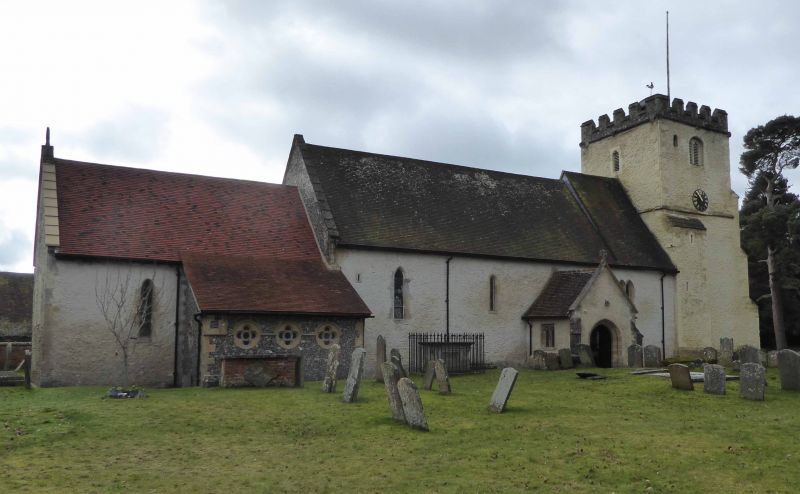 Tower: two stages divided by moulded string courses; plinth, C19 embattled parapet and western angled buttresses extended to nearly half the height of the second stage. On the west and south, below the first string course, are small windows with pointed heads, one on each face. On the west wall is a late C15 doorway with a four-centred arch under a square head and an old planked door with plain iron hinges. Above it is a late C15 three-light window with tracery and a two-centred head. In the north face of the bell chamber is a window of two trefoiled lights, with a four-centred head. Two-light windows with two-centred heads on the west and south faces. There is a rectangular stair turret on the north side reaching to the first stage.

Nave; north side: two C13 lancet windows in the east end, the first with a chalk head; the third and fourth windows are C19. Between the two lancet windows is a C12 doorway in a C15 porch, with chamfered jambs and a semi-circular arch, moulded abacus and a double billet moulded label.

Nave; south side: at the east end at high level, a small C15 trefoiled ogee light inserted to give light to the former rood loft. Further west are two two-light C19 windows and a C12 doorway now blocked, with a semi-circular arch.

Chancel: two C13 lancet windows on the east wall and a restored plan lancet in the north wall; to the west of this is a C19 vestry doorway. On the south wall are two single lights, and between them a C13 priest's doorway, now blocked.

Interior: early C17 six bay double trenched purlin roof to nave, with arch race collars, moulded pendants and scissor bracing above collar. A three bay early C15 double trenched purlin roof over chancel with arch braced collars and curved wind braces; the easternmost bray a planked barrel roof with cusped ribs, probably C19. The chancel arch is C19 with foliated capitals. At the east end of the north wall of the nave are the remaining stairs to the former rood loft. Near the west jamb of the north doorway, is a deep aumbry with rebated jambs and a bolt hole, and a damaged piscina on the south wall of the nave at the east end. Beside the C19 font, is an earlier marble font on a fluted shaft, which was given by Mr.Benj. Matthews in 1768. Fixed against the blocked south doorway, is an early C13 carved stone knight on horseback in low relief, contained in a glass case. To the east of this is a C13 wall painting of our lady.