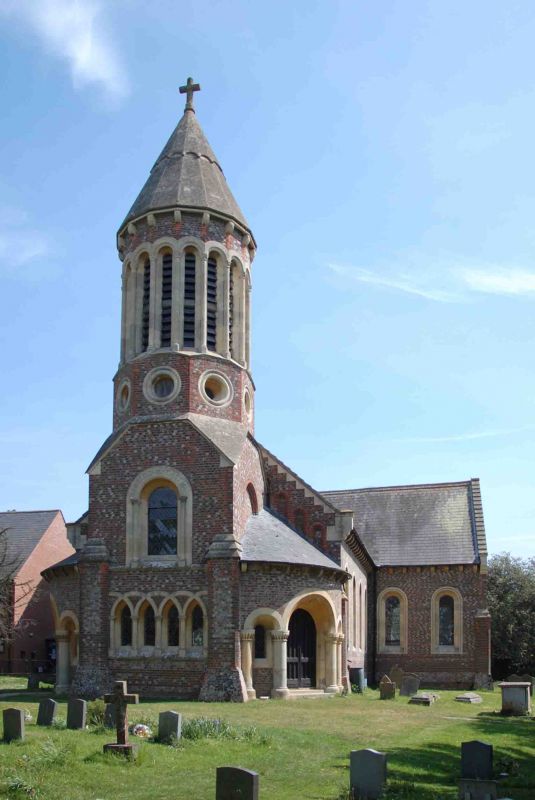 Parish church. 1843 by J.B. Lacey in the Romanesque style, the chancel added in 1892 by Bodley and Garner in the Decorated style. Brick in header bond, stone chancel, stone dressings to doors and windows: steeply pitched slate roof. Wide nave, wide transepts, chancel, and west tower; two entrance porches in the angles between the tower and nave. Four bays of round headed windows with stained glass to nave, two bays with leaded lights to each transept, two-light windows with reticulated tracery to nave. Large stone corbel blocks under eaves to nave. Tower in three stages, the top stage polygonal with a small squat spire on top, stone arcaded opening at bell stage and stone oculi below.

Interior: An C18 wall tablet on the north wall of the north transept, marble with pediment, to Mrs. Mary Robinson who died 1789. A C14 carved wood effigy of Sir Roger de Burfield contained in a glass case in the chancel. Two C15 stone effigies under the tower, believed to be of Neville, Earl of Salisbury and his wife, Alice, both defaced. The font is a large tapering bowl of C12 re-cut C14 in ten-sided form with shallow trefoil-headed panels. Stained glass in east window by Burlison and Grylls.