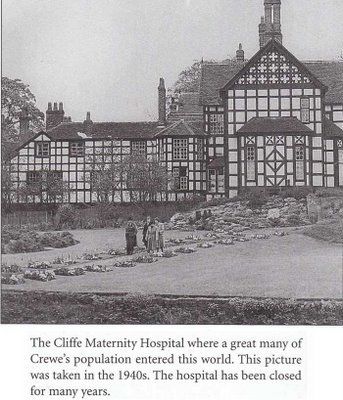 House. Mid-late C19. Brick covered by imitation timber framing. Two
storeys with attic. Entrance front: gabled porch wing to right with
4-centered archway with foliage to the sprandrels and three arched
panels above with bulbous Jacobean pilasters bearing Ionic capitals
between. Coats of arms to the panels. Three-light oriel window to
first floor supported on carved brackets with decorative
lozenge-shaped glazing which occurs over the whole of the building.
The timber framing to either side of this contains ogee struts.
Quatrefoil framing to the gable which is jettied and has moulded
bargeboards and decorated brackets. To the left of this is a
two-light ground floor window and to the left again a two-storey
canted bay window which has three-light windows to the centre and
2-light casements to the angles. Hipped roof over. Garden front:
originally of 3 bays, the left hand bay has been demolished. The left
hand window (originally the central window) has a similar canted bay
window to that seen on the entrance front with decorative quatrefoil
panelling. To the right is a projecting gabled wing with 4-light
casement windows to the ground and first floors each with mullions and
one transom. To the jettied gable is decorative quatrefoil panelling.