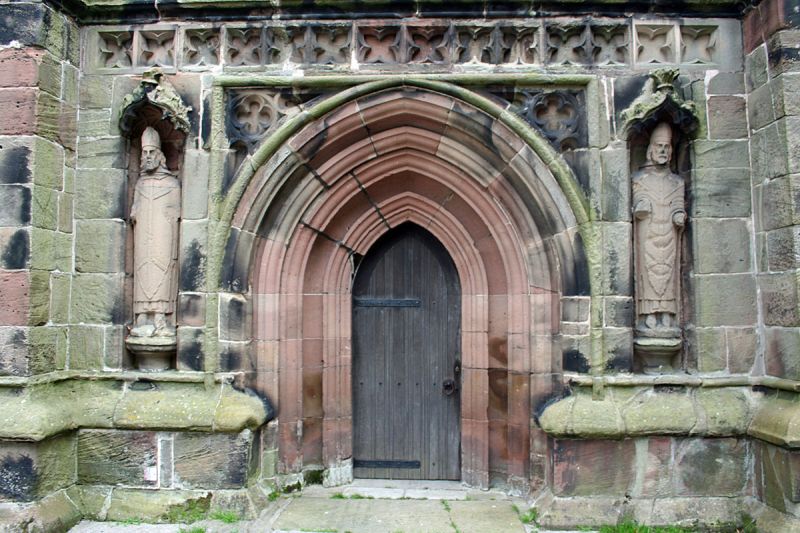 Church Tower C15 or C16. Sandstone ashlar with lead roof. Square
tower of 5 stages. Western front: Moulded projecting plinth with
chamfered top and string courses between stages, all common to whole
building. Clasping buttresses to lower body (probably of early C19
date) dying to diagonal buttresses via broaches. Central doorway with
richly moulded deep reveal (probably recarved in the C19). Quatrefoils
to spandrels and niches to either side with crocketed ogee heads each
containing a sculpture of a bishop. Pair of decorated square panels
above immediately below the brattished string course. Central window
above with 3-light interlacing tracery in casement moulded surround of
C19 date. Niches to either side with statues under projecting canopies
with crocketed spirelets above. Brattished string course above.
Central niche to third stage similar to those at the second stage here
holding a statue of a king with sword. The fourth stage has a central
square wrought iron clock face. The fifth stage has two 2-light belfry
openings under a common ogee hood-mould. Above are a row of decorated
square panels. There are gargoyles to the angles and centre. The
battlemented parapet has crocketed pinacles to the corners. The North
and South faces are similar save for the lack of niches and the door
and that they each have a 2-light window to the third stage. The rear
has a cambered archway originally giving access to the church the ridge
of which rose to the top of the second stage. The third stage has a
lancet but no clock face. The tower lists to the north due to the
sandy soil on which it is built. At the time of the re-survey (1985)
it is in danger of collapse. In 1833 the earlier church was demolished
and the tower straightened by James Trubshaw who erected a new body
consisting of nave and chancel loosely based upon the previous
building. This was in turn replaced in 1892-3 by a church by James
Brooks which was demolished c.1976.
Source: Nikolaus Pevsner & Edward Hubbard -
The Buildings of England:Cheshire.