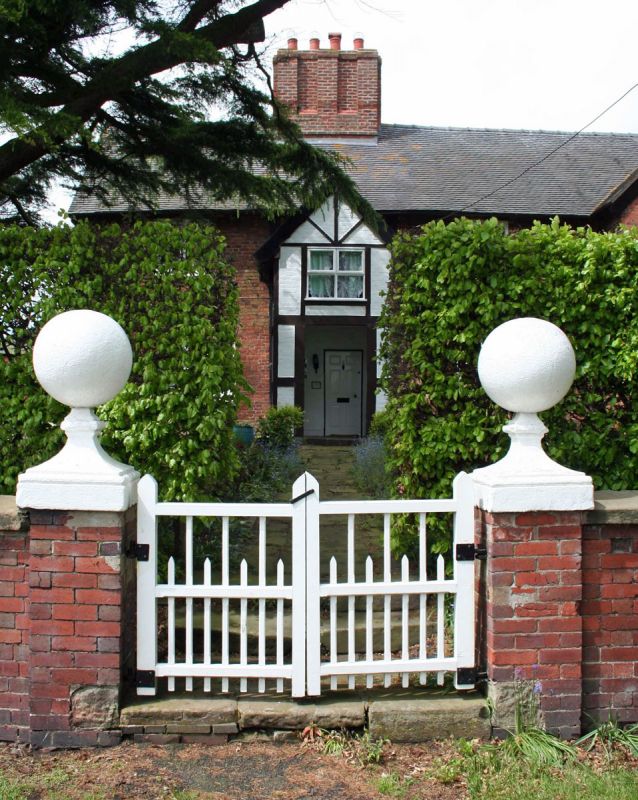 HANKELOW C.P. HANKELOW LANE
SJ 64 NE
4/48 Ball Farmhouse
12-1-67
GV II*
Farmhouse. C16 or early C17, with early/mid Cl-9 additions and
alterations. Timber framed with rendered infill. Largely replaced to
the exterior in the early/mid C19 with Red Flemish bond brick and a
plain tile roof. Two storeys and attic. Entrance front: 4 bays,
gabled projecting wing to the right hand side with a three-light
cambered headed window to both the ground and first floors with tile
sills. Band of two bricks depth dividing the first floor from the
attic which has a 2-light casement attic window. To the left of this
are three recessed bays, the central one of which has a projecting
2-storey gabled porch superimposed upon a fragment of the original
timber framed walling which shows as two posts to the upper wall
behind. Door within the porch of 6 panels, the upper 4 raised and
fielded. 2-light casement window to the first floor. To the right
hand side is a ground floor window of two lights with cambered head
and tile sill and to the left is a similar window of 3 lights. To the
first floor at either side are two-light casement windows. Massive
ridge chimney stack of 4 flues above the entrance. The right hand
side has a massive chimney stack of 4 flues with offsets and to the
right of this is a section of timber framing to the first floor with
close studding and a middle rail and a further cross rail above this.
There is a casement window with ovolo-moulded wooden surround of 5
lights with mullions and a transom which appears in part to be of C16
or early C17 date. The rear has at left a timber framed gable mostly
obscured by a later C19 gabled projection of lesser height. The right
hand flank of this wing has small framed walling with an angle brace.
To the right of this is simulated timber framing and at right of this
is close studded framing with a middle rail to the first floor, the
ground floor being obscured by C19 and C20 outshuts.
Interior: Ovolo moulded ceiling beams with end stops and rafters.
Ingle nook fireplace with moulded bressumer. Arch with central pendant
boss. Staircase with spiral balusters in place of original splat
balusters and massive square newels with ball finials. Linenfold and
other panelling. One first floor room has foliate ornament to the
plaster ceiling.