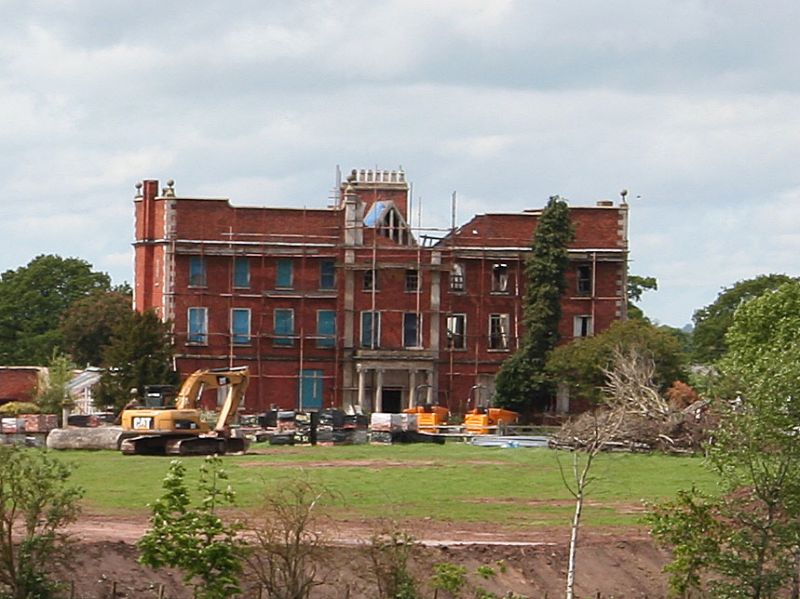 HANKELOW C.P. (Off) HANKELOW LANE
SJ 64 NE
4/49 Hankelow Hall
2-9-54
- II*
Country house. Early C18 with alterations of c1755 by William Baker.
Red random bond brick with ashlar dressings. Three storeys. Entrance
front ten bays symmetrically disposed. Ashlar quoins to the corners
and ashlar pilaster strips to either side of the two central bays
rising to the parapet which is "Startlingly high" (Pevsner) and ramps
up at the corners which also have ashlar quoins and ball finials and
an ashlar coping. To the centre, over the two central bays is a
pedimental gable which contains a blind round-headed stilted arch with
ashlar surround and projecting keystone and springers. Stone band
between ground and first floors and ashlar string course between the
second storey and the parapet. The ground floor has a central ashlar
flat-roofed porch with four debased Ionic columns and simplified
entablature most probably of C19 date. Behind this is a central double
doorway with moulded surround and narrow sash windows at either side.
To either side of this central porch are two sash windows of 3 x 4
panes with stone sills and flat arched heads. These have recessed sash
boxes and are part of the remodelling of the ground floor undertaken
by William Baker. The ground floor also appears to have been
tuck-pointed in simulation of Flemish bond. Some remnants of this
survive below the stone band and it is possible that this may have
extended to other floors and fronts. To the first floor are ten
windows of 3 x 4 sash panes with thick glazing bars and exposed sash
boxes, stone sills and flat arched heads. Ten similar windows of less
width and height to the second floor. The left hand return has a
rectangular chimney stack at right of centre. Ashlar quoins to the
corners and a stone band between the ground and first floors and an
ashlar string course between the second floor and deep parapet which
has ball finials to the corners. To the right of this at ground floor
level is a canted bay window with central French windows approached by
a flight of steps, the top one of which has the inscription GWC 1867.
To left of this is a ground floor window of 3 x 5 panes with exposed
sash boxes which shows the probable form of the original ground floor
openings to the entrance front. Two first floor windows of 3 x 4
panes and two windows of 2 x 4 panes to the second floor. The left
hand return is of C20 random bond brick with one second floor window
at right. The rear has stone quoins to the corners and the parapet
ramps up at either corner. The window openings, some of which at
mezzanine level are randomly disposed and have basket-arched heads.
Interior: At the time of the re-survey (1985) the interior which
contains panelled rooms, C18 2-panel doors and C18 fire-surrounds of
stone and wood was boarded up as a result of persistant vandalism.