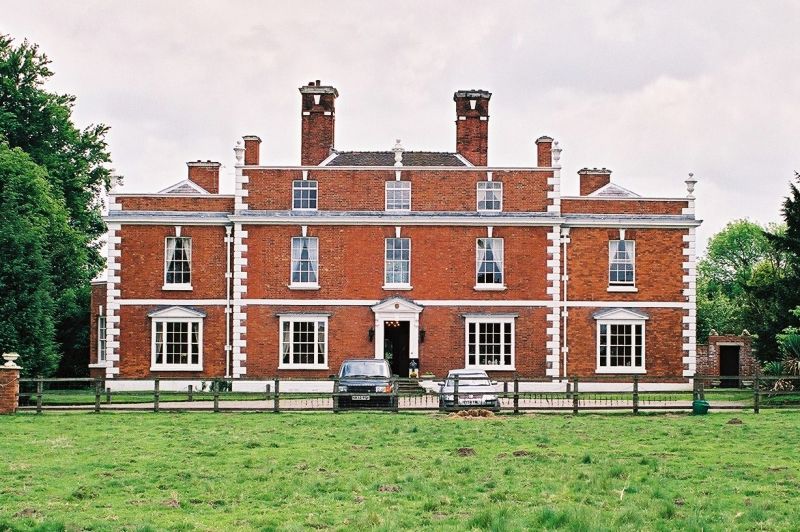 Small country house. 1737 for John Bailey with early C19 additions
and alterations. Red Flemish bond brick with painted ashlar dressings
and a tile roof. Two storeys with an attic to the central portion.
Entrance front: The front was heavily remodelled in the early C19.
At this time the lateral, slightly recessed, wings were added as was
the walling to the attic storey although the original roof appears to
have been maintained, the dormer construction of the windows being
masked by a curtain wall. At the same time the number of bays in the
central block was reduced from five to three retaining the central
first floor window and imitating its form to either side. There is a
slightly projecting plinth common to the whole facade but with a
moulded top to the central three bays. Chamfered quoins to the corners
of the central portion and of the lateral wings. Central doorway above
a flight of four C20 steps with a 6-panel C20 door and a panelled stone
surround with a pediment supported by consoles and the projecting
keystone. To either side are early C19 tripartite windows with central
lights of 3 x 4 panes and lateral lights of 1 x 4 panes. These have
panelled wooden surrounds. Band between ground and first floor which
has three windows of 3 x 4 sash panes and moulded stone sills and
flat-arched heads with central keystones. Moulded cornice above this,
originally terminating the wall. The attic has three windows of 3 x 3
panes with flat-arched heads similar to those at first floor level.
Moulded stone coping to the brick parapet which has a central gadrooned
and spiral-fluted urn with a gadrooned lip and simpler gadrooned and
fluted urns to the corners. The hipped roof has two lateral chimney
stacks of square section of c.1737 having a recessed arched panel to
the centre of each side with stone springers and keystones. To either
side are the early C19 wings which have windows similar to those at the
centre but with pedimented heads. To the first floor are sash windows
of 3 x 4 panes. There is a band below the brick parapet which has a
similar coping and corner urns as the central block. To the inner
angles of these lateral wings are displaced rainwater heads with
JOB/1737 in relief presumably originally attached to the sides of the
house. The left hand side has a later C19 canted bay window to the
ground floor. The right hand side has three ground floor windows each
of 3 x 5 panes with marble steps below and 3 first floor windows of 3 x
4 panes. The rear has two joined gables with early C19 brickwork
filling the lower part of the valley. To the ground floor at either
side are cambered bow windows with semi-conical roofs.
Interior: Pine 6-panel doors to the ground floor. The library has
raised and fielded panelling and a C20 fireplace flanked by female
terms with a sunburst over. Two of the upstairs rooms have bolection
moulded C18 panelling and painted stone fire-surrounds with projecting
fluted keystones.
Source: Nikolaus Pevsner - The Buildings of England - Cheshire
and Edward Hubbard