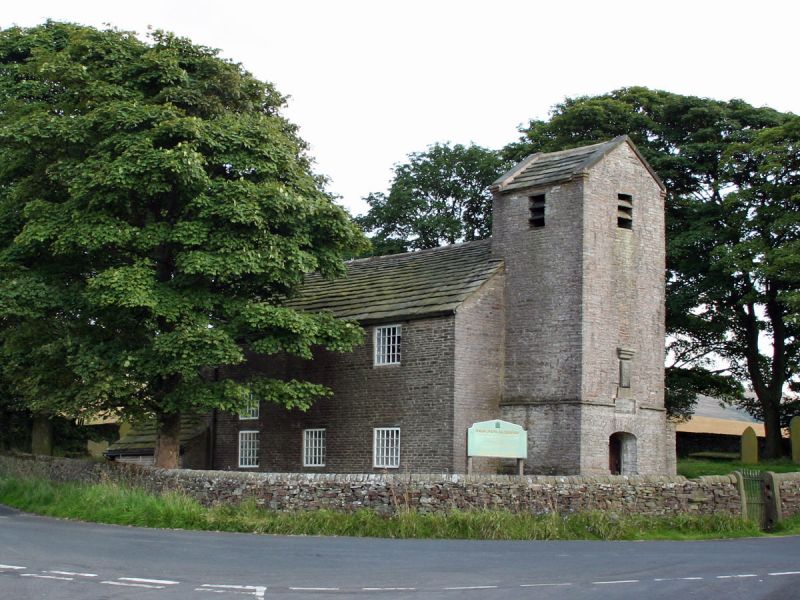 Church: nave and chancel dated 1733 and built by local subscription
and tower added 1755. Kerridge stone-slate roof, stone ridge and 1
stone chimney. 2-storey nave, 1-storey chancel and vestry and low
3-stage, saddleback tower. Nave has 3 fixed 20-pane windows below and
2 above. East window of chancel is 3-light casement with lancet
above. Studded 5-board west door has rubble segmental head. Breaking
projecting rubble band above are 2 stones the upper reading
"3 :John : Bap:ts. Free Chapel was, June 24th 1733, Erected". Partly
erased tablet below reads "....At John Slacks expence in 39 made
sacred for worship of Almighty God". 2nd stage of tower has door to
gallery on south side reached by external stone steps, and 3rd stage
has rectangular bell openings with stone flag louvring.
Interior: West porch has stone flag seats. Nave has west gallery and
complete set of simple oak box pews, a pulpit and carved reader's
desk. Chancel opening has a wooden lintel from which hangs a screen
with turned balusters. Similar balusters in altar rail and
wainscotting behind altar.

A very picturesque church in its moorland setting, built in a
vernacular style with its interior and exterior surviving intact.
Also known as Jenkin Chapel.