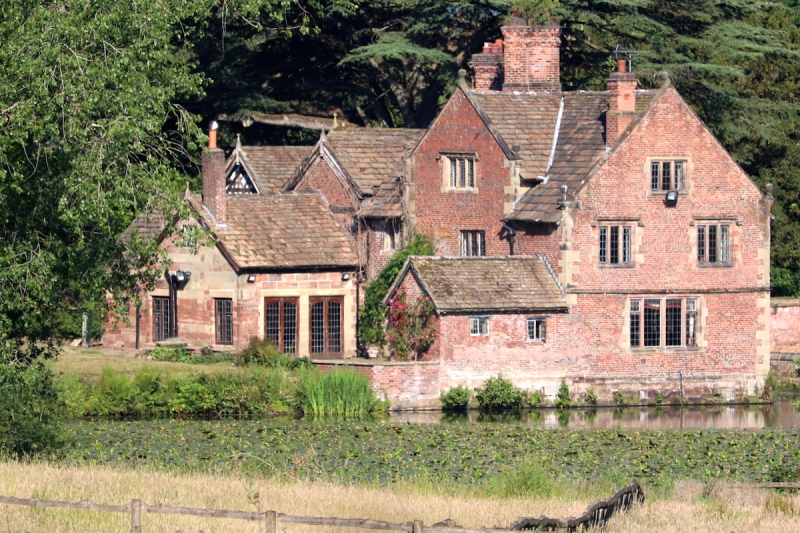 Manor house: early-mid C17 for Sir Thomas Stanley II with earlier
fragments and addition and alterations of 1912 by Edmund Warre of
London; English garden wall bond red brick with some purple bands.
Buff sandstone dressings, Kerridge stone-slate roof and 3 brick
chimneys, 2 with diamond shaped end stacks. Rectangular plan. 2 and
3-storey, 3-bay south front. Projecting stone band at 1st floor.
Central bay of 3-storeys has rebated 5-light chamfered stone mullioned
windows in ground and 1st storey and similar 3-light under a hood
mould in a stone-coped and ball finialled gable. To left is a bead
moulded stone doorcase with a cambered lintel and a 3-light window
above. To right is a C20 door. Additions in ashlar to west are of
1912.
Interior: Main room has light oak wainscotting (probably 1912) and
2-panelled doors with large diamonds in each panel. Heavy chamfered
ceiling beams. Remainder of interior unexceptional.
What survives is an addition to the earliest hall of C16. A major
Baroque front of 1754 was destroyed by fire in 1779 and demolished and
this led to the building of the now demolished Alderley Park. The Old
Hall stands in a decorative moat made by adding an arm to the mill
pond in the late C16.