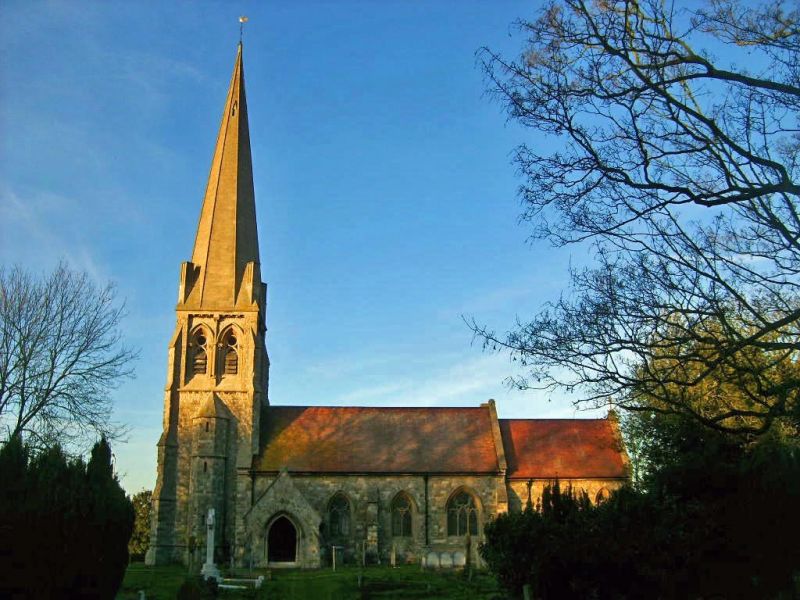 MATERIALS: brick and coursed, dressed Kentish ragstone with Bathstone details and machine-made red-clay tiles to the roof. The spire is of smooth stone.

PLAN: the Church has a nave, chancel, north aisle, a south porch and a western tower with a tall, broach spire. There is a small north projecting vestry at ground floor with the organ loft above.

EXTERIOR: the nave and chancel have coped gables and stepped, half-buttresses. The nave has moulded stone eaves and single, double or three-light pointed-arch windows, with bar tracery and alternate quatrefoils or trefoils at the apex. With the exception of the memorial windows, the glazing comprises diamond leaded lights. The stained glass east window has three lights with two quatrefoils and a trefoil. The north elevation comprises a projecting vestry with east facing windows at the ground and first floors and a squat stair turret with a tiled, conical roof surmounting moulded smooth-stone panels pierced by trefoil openings. A door below leads to the vestry.

The south porch has two corner buttresses and a pair of wrought iron entrance gates set in a pointed arch surround with carved, pilaster jambs and a hood mould with carved-head stops. The oak church door has wrought iron straps, and carved coffering to the interior.

The west tower has three stages and stepped diagonal buttresses to the west; a stair tower with arrow-slit openings is attached to the south. The first stage has a memorial window at the west elevation and the belfry has pairs of two-light, pointed arch window openings with pilaster jambs, carved capitals and louvres at each elevation. At the base of the tall broach spire four, moulded stone pinnacles diagonally placed at each corner appear unfinished.

INTERIOR: the roof structures of the nave, chancel and aisles are supported on slender, moulded stone brackets in the form of cornucopia; the pine, arch-braced roofs have pairs of windbraces on each pitch. The four-bay nave has alternate round and octagonal piers with deeply moulded capitals and bases; some of the carving is by T. Earp. The chancel arch is supported by three engaged columns at each side, one in polished marble, with moulded capitals and bases; the inscription above reads ‘Yield yourselves to the Lord and enter into His sanctuary’. The vestry in the north transept has C18 and C19 memorials taken from the previous church attached to the walls; one of 1804 to William Hucks is by Richard Westmacott. A stair leads to the organ loft above where the 1938 organ by Cedric Arnold of Thaxted, gifted by Mrs L.C. Keene, is located. Above the window at the east gable end of the loft is the inscription ‘O Come let us sing unto the Lord’. The loft has a double opening onto the chancel with richly decorated columns, bar tracery and a wrought iron screen. The chancel itself has simple panelling beneath a carved stone dado behind the plain altar table which has a delicately carved reredos attached to it. The floor is covered with encaustic tiles. A lavabo is located on the south wall. The contemporary east window by Powell and Sons depicts the Annunciation, the Incarnation and the Crucifixion. In the north aisle is a simple, timber war memorial attached to the wall and there are brass memorials attached to the south aisle wall. Other stained glass memorial windows are to Arthur Pryor depicting Faith Hope and Charity, and another to his wife Elizabeth flanked by Martha and Mary. A further memorial window is located at the west elevation of the tower.

The font is of Portland stone and has a timber lid with iron strapping; it may predate the church. The timber nave pews, pulpit and choir stalls (some with poppy heads) are contemporary.

There have been two churches on the site of St Mary’s before the current building was constructed in 1862, commissioned by wealthy local brewer Arthur Pryor, the owner of nearby Hylands House. The previous church was built in 1604 and is known to have comprised a nave and a chancel with a chapel on the north side. Pryor commissioned J. Piers St. Aubyn (1815-95), an architect known principally for his restoration of churches particularly in the south-west, to design the church in the Decorated style. Tombs from its predecessor survive in the churchyard most notably the pyramidal monument of 1778 to Sarah, Viscountess Falkland (d. 1776), designed by George Gibson, listed separately at Grade II.

The church is little altered. Since it was built, memorial windows have been inserted and the current organ was gifted in 1938. There has been some reordering including the insertion of a raised platform near to the chancel. The ground floor of the tower has been screened off, partially to form toilet and kitchen accommodation with a crèche facility at the first floor. The bells can no longer be rung as a peal; an electronic chiming system has been installed. In the 1970s, the tower pinnacles were removed for health and safety reasons.

The Church of St Mary, Widford, erected in 1862, is designated at Grade II for the following principal reasons:
* Architectural Interest; it has an accomplished exterior with richly textured materials and notable features including the distinctive and carefully detailed vestry at the north elevation and belfry windows;
* Architect; the church was designed by J.P St Aubyn a renowned Victorian architect who built or restored numerous buildings on the National Heritage List for England;
* Interior: has some notable characteristics, in particular the well-crafted roof structure resting on cornucopia brackets and the richly decorated opening from the organ loft into the chancel. The choir stalls and east window by Powell and Sons have merit;
* Group Value: the church has group value with Widford Rectory to the south and the monument to Viscountess Falkland in the churchyard to the north, both listed at Grade II.