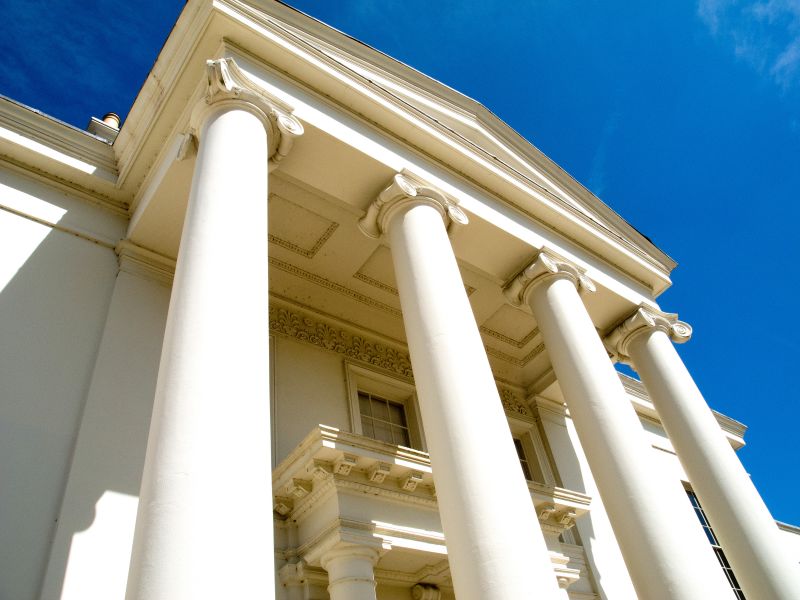 the description shall be amended to read:

Country house. Circa 1728 for Sir John Comyns MP, remodelling in
early C19 in Palladian style proposed by Humphry Repton; west wing
1815-1818 by P C Labouchere; east wing 1842-48 by J Attwood,
restored in 1986-7 by Chelmsford Borough Council. Stuccoed brick
with hipped slate roof behind blocking course. Stuccoed stacks with
cornices. Neo-classical style. The central two-storeyed block has
2:3:2 bays with coupled end pilasters and a corniced parapet and is
crowned by a slated, dormered, mansard roof and eight chimney
stacks. Across the three central windows flanked by pilasters, a
tetrastyle pedimented portico in the unfluted Ionic order rises
through both storeys. The mouldings of the entablature are plain,
and the frieze and architrave are undivided by mouldings. The inner
capitals are parallel-sided, and the volutes of the corner capitals
are joined at an angle. The columns are paired on plain stone
plinths and the ceiling is panelled. A semi-circular arched central
doorway with a Tuscan portico and modillion cornice is flanked by
semi-circular arched windows. A palmette and rosette frieze runs
along the top of the upper windows. The west wing (P C Labouchere,
1815-1818) is single-storeyed, with a similar corniced parapet and
a hipped roof, having a five-window range, the central three
breaking forward slightly to form an Ionic tetrastyle colonnade in
antis. A semi-circular arched doorway was inserted in one of the
window openings in 1908. The present east wing (J Attwood, 1842-
1848) follows the design of the earlier west wing, but is slightly
longer. It replaced the first extension (Kortright, 1797-1803). All
the windows are double-hung sashes with glazing bars. The two end
bays at the back of the central block have bow windows (1797-1803),
which were later splayed (1842-1848). Interior: Good interiors
including drawing room and banqueting hall with neo-Baroque
decoration; stairhall with elaborate iron balustrade to staircase
and plasterwork to designs by Bertel Thorvaldsen in entrance hall
and stairhall. Note: Situated in 500-acre park.

II*
2.
A large C13 and C19 stuccoed house built for Sir John Comyns, circa 1728 in
a park of about 600 acres, altered later in the C18 and again in 1819-25 and
1845 by William Atkinson who added the central Ionic portico and the side wings,
the 2nd wing was added in 1845. The present building has an imposing south-east
front of 7 window range with coupled end pilasters and a moulded cornice and
frieze between the 1st and 2nd storeys. The 2nd storey is divided by pilasters.
The centre part, of 3 window range, has a great Ionic tetra-style pedimented
portico- with giant plain columns rising through 2 storeys. The ceiling is panelled.
A semi-circular arched central doorway with a Tuscan portico with a modillion
cornice is flanked by semi-circular arched windows. The windows are double-hung
sashes with glazing bars. The side wits are 2 storeys, each of 5 window range,
arranged 1:3:1. The centre part, of 3 window range breaks forward slightly
and the ground storey is recessed with a tetra style Innic colonnade in antis.
A moulded cornice runs between the storeys. Roof slate, hipped. The north-west
front was also altered in the C19. and the 3 storeyed centre block has a parapet
and cornice, 3 storeyed canted bays at each end and a window range of 3:3:3.
Moulded string courses run between the storeys. The 2 storeyed side wings
have 1:3:1 window range and the centre part, of 3 window range, breaks forward
slightly with a cornice and parapet. The windows are double-hung sashes with
glazing bars.