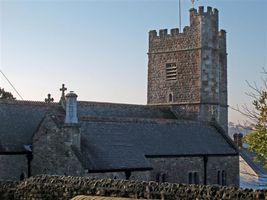 Parish Church. Norman font, late C14 arcade and east window to aisle, late C15
tower, the rest thoroughly renovated if not rebuilt in 1883 by Haywood and Son.
Both the C15 and C19 masonry is similar: local stone rubble with Beerstone detail.
The roof is of red tiles with crested and pierced ridgetiles.
The layout appears to be that of the Perpendicular church but only the late C15 west
tower remains essentially intact. The nave with its south porch and the slightly
lower and narrower chancel appear predominantly 1883 work. So too does the north
aisle although the arcade and east end are late C14. The vestry and organ loft on
the north side of the chancel was new-built in 1883.
The west tower is of 2 stages, unbuttressed with chamfered plinth, soffit-moulded
dripcourses and embattled parapet. On the north side the semi-hexagonal stair
turret projects. It contains tiny slit windows, some shaped as quatrefoils, and
rises above the main tower with its own embattled parapet. It is surmounted by a
wrought iron weather cock, presumably C19. The belfry window to right of the turret
has a flat-arched head with sunken spandrels. Similar 2-light belfry windows on the
other sides. The doorway on the west side is a 2-centred arch with moulded surround
and contains a C19 plank door with studded coverstrips and plain strap hinges. The
3-light window directly above has much-restored Perpendicular tracery and moulded
hood.
The rest of the exterior shows only 1883 detail. All the gables have Beerstone
kneelers, coping and apex crosses. The south side of the nave projects a little
from the tower. It has 3 windows interrupted by the gabled south porch to left of
centre. Its 2-centred outer arch has a moulded surround and a hoodmould with its
labels carved as a king and bishop's head. The window to left is 2 lights with
acutely pointed arch. The window to right is 3 lights. Both have Perpendicular
style tracery and hoodmould with carved head labels. The right (east) end window is
a small trefoil-headed lancet close to a buttress with weathered offsets marking the
end of the nave. The south side of the chancel has 2 lancets, one each side of the
priest's doorway, a 2-centred arch containing a plank door. All have chamfered
surrounds. The east end contains a large 3-light window with Perpendicular tracery
and hoodmould without labels. On the north side is another lancet before the gable
end of the vestry which contains a doorway identical to the priest's door with an
arch-headed window alongside containing Y-tracery. An octagonal chimney shaft rises
from the outer corner. There is a single lancet on the north side. The vestry
projects a little from the north aisle. The north side of the aisle contains 3
windows, all are 2-light with flat-arched heads and sunken spandrels whilst the west
end window has a very low segmental pointed arch over 3 lights, like triple lancets,
with sunk spandrels and moulded hood. There are C19 cast iron drainpipes all round.
Interior. The porch has a tile floor and common rafter roof of 1883. Contemporary
south doorway is a 2-centred arch with chamfered surround and contains a plank door
with ornate strap hinges.
All the roofs are open C19 wagon roofs with moulded arch bracing to the main
trusses, moulded purlins and large carved bosses. These are backed by pine boards.
The tall tower arch is late C15. It has a chamfered surround and the soffit of the
arch itself is lined in Beerstone with sunken trefoil-headed panels. The chancel
arch is C19, a plain Beerstone arch with chamfered surround. The 3-bay arcade is
late C14 and carried on octagonal piers with plain soffit-chamfered caps. There is
a contemporary 3-light window with Perpendicular tracery at the east end of the
aisle, now blocked by the C19 organ loft. There is a large Beerstone arch from the
chancel to the organ loft and a small 2-centred arch doorway alongside to the
vestry. The floors are of C19 tiles with encaustic tiles in the chancel which are
used increasingly towards the altar which sits on a marble plinth containing panels
of encaustic tiles. Either side are reset graveslabs of C17 rectors.
C19 oak Gothic-style altar and similar carved oak reredos comprising a blind arcade
on a marble shelf and flanked by original brass candle holders. Beerstone piscina
to right in trefoil-headed arch. The oak altar rails are C17 in style. It has a
moulded rail on clustered shafts with moulded caps. C19 stalls in Gothic style and
similar oak octagonal pulpit with openwork quatrefoils in the panels. Attractive
C19 brass lectern with twisted stem and scrolled brackets. C19 plain deal benches.
C19 Gothic style panelled tower screen. C17 oak chest has panelled front and is
incribed GD 1662. The base of the font is Norman. It has a C19 square bowl of
Beerstone and the 4 corner columns of marble are contemporary. The circular
sandstone stem and moulded base, however, are Norman.
Some plain C19 marble monuments. On the south side of the chancel a small Beerstone
plaque is insribed with the sacred monogram and includes the initials IR and date
1603. It was set in the gable of the porch before the 1883 restoration. Some good
Victorian stained glass. The east window is a memorial to Lydia Hoskin Pippin
(d.1870), but the best are the Queen Victoria Jubilee window in the nave and the 2
in the aisle. Painted arms of George IV in the tower and dated 1830. A painted
board in the porch records a contribution towards the 1883 restoration.
The late C15 tower was the only part to survive the 1883 restoration substantially
intact although the arcade and east window of the north aisle are late C14. It was
nevertheless a competent restoration and the church provides a nice centrepiece of
an attractive hamlet.
Source: Devon C19 Church Project