A Grade I Listed Building in St. Anthony-in-Meneage, Cornwall 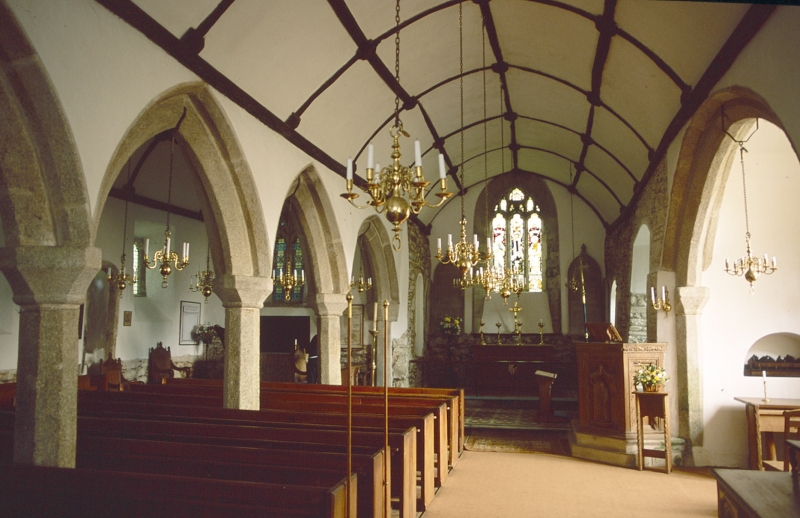 Parish church. C12 font, S. transept and parts of south wall possibly also C13 but
remodelled in the C15 and the C19, tower and north aisle are C15. Granite ashlar
tower, otherwise shale rubble walls with dressed granite to most openings. Scantle
slate roofs with many circa C17-18 hand made crested clay ridge tiles all with gable
ends the one to south transept with dressed granite coping.
Probably a cruciform plan in the C12-C13 with porch added soon after. West tower
and north aisle are probably late C15. Rood stair turret to north wall remodelled
as a doorway probably in the C17. Some C19 restoration including the replacement of
the south windows and the addition of buttresses to the north and south walls.
3-stage C15 embattled and pinnacled west tower is complete and unaltered: 4-centred
moulded west doorway with square hoodmould and flat relieving arch circa C17-C18 2-
panel door, 3 light repaired Perpendicular window with coloured glass, over; 2nd
stage blind; 3rd stage with 3 light louvred Perpendicular window to each side. By
the south-west corner of the tower is the resited remains of a medieval holed cross
head with a faced carved on one side. North aisle has C15 granite Perpendicular
windows, arched window at either end and sqaure headed to north wall, all with
cinquefoil headed lights and all with hood moulds. The west gable end window has
quatrefoils to the tracery. The 3-light east window also with tracery and coloured
glass. The north wall has 1 window left of stair turret and 2 at the right with C19
weathered granite ashlar buttresses between. The turret has a circa early C17 Tudor
arched doorway.
Chancel has 3-light Perpendicular east window with tracery and coloured glass.
South wall with 2 C19 buttresses has single light window between buttress with old
jamb to one side and resited arch stone over, possibly a remodelling of an original
C13 window. At the left near the angle with the south transept is a 2-light C19
window.
The south transept probably remodelled in the C15 and partly rebuilt in the C19 has
C19 3 light traceried granite window in early Perpendicular style to the south gable
end.
Porch adjoins in the left hand angle of the transept. Left of the porch to the
south wall of the nave is a 2 light C19 Perpendicular style window. The porch outer
doorway has rubble jambs carrying a 2-centred chamfered freestone arch possibly C13
or resited. The C15 moulded inner doorway is 4-centred almost basket arched. There
are stone benches at either side of the porch and a holy water stoup in the east
wall.
Interior: Fine C15 waggon roofs over nave/chancel and north aisle with carved
wallplates, ribs and purlins plastered between; walls also plastered; 5 bay arcade
between nave/chancel and north aisle with steep 4-centred 2 ordered arches over
octagonal piers; similar arch to south transept on corbelled imposts; basket arched
doorway to rood stair and rear arch to east window of north aisle. Niche in north
wall of chancel may be in original C13 window position.
Fittings: C15 round inscribed granite font with angel carvings. Base of C12 font
nearby. Painted Royal Coat of arms to north wall, flanking the east chancel window
the Ten Commandments, left, the Creed, right, and the Lords Prayer, under; chancel
east window glazed 1890 by A.P. and J.G. Vivian of Bosahan. North aisle east window
in memory of John and Mary Roberts, 1890. Most of the other fittings are C19.
Monuments: one to the west wall of the south transept to Humphry Millet Grylls of
Bosahan, died 1834 aged 44.
Sited near the mouth of the beautiful Gillan Creek almost on the shoreline, this
church has survived less altered than most since the C15 and the waggon roofs are
particularly remarkable.