A Grade I Listed Building in Tolleshunt Major, Essex 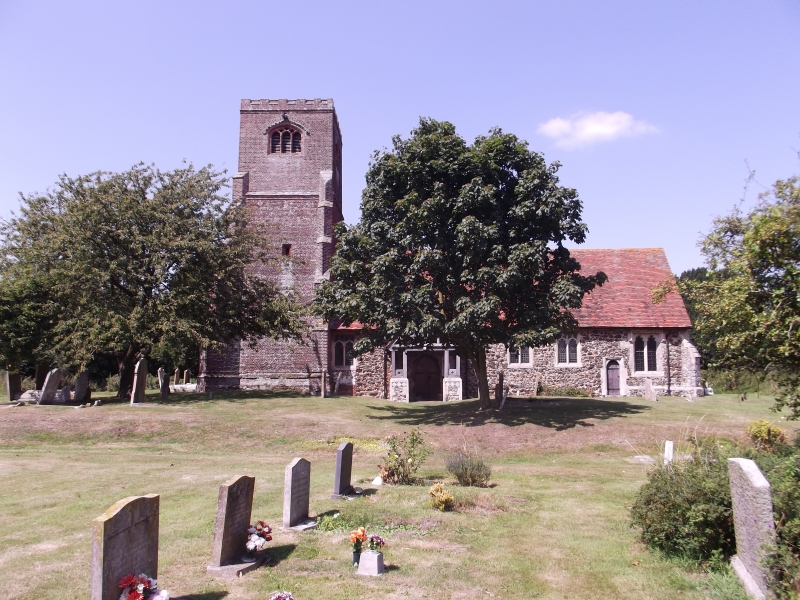 Parish church. C12 fabric with C15 and early C16 detail, restored in C19.
Flint rubble and indurated gravel conglomerate, with limestone dressings, roofed
with handmade red clay tiles. Tower of red brick in English bond, roofed with
lead. Chancel and Nave in one piece, C12. W tower, early C16. S porch and N
vestry C19. The Chancel and Nave have a moulded plinth. The E window is C15,
restored, of 3 cinquefoiled lights with vertical tracery in a 2-centred head,
with moulded label, hollow-chamfered rear-arch and early wrought iron grill. In
the N wall is an early C16 archway of plastered brick, originally leading to a
N chapel, now to the N vestry; it has a 4-centred arch of 2 chamfered orders,
and semi-octagonal responds with moulded capitals and bases. In the S wall are
2 windows; the eastern is C15, partly restored, of 2 cinquefoiled lights in a
square head, with an early wrought iron grill; the sill is carried down to form
a seat. The western window is C19. Between them is a C15 doorway with moulded
jambs, restored, and 2-centred arch in a square head with traceried spandrels
and foliate bosses. Over it on the inside is a plastered groove retaining the
western outline of an earlier 2-centred window in the same position. There is
no chancel-arch. The roof of the Chancel is in 2 bays, with a tiebeam with
double-ogee mouldings. The S wallplate to the W of it has C14 mouldings; to the
E it has C15 mouldings. The N wallplate is plain. The roof is 7-canted,
plastered to the soffit. The Nave has in the N wall a C15 window of 2
cinquefoiled lights in a square head, with moulded label and early wrought iron
grill. E of the window is a blocked early C16 doorway of plastered brick, with
jambs and 4-centred arch of 2 chamfered orders. At the W end of the wall is an
early C16 N doorway of stone, with moulded jambs, 2-centred arch and label, and
contemporary brickwork above and around it; it is now blocked and converted to a
window. In the S wall are 2 C19 windows; between them is the late C14/early C15
S doorway with 2-centred arch of 2 moulded orders, and jambs with 2 recessed
chamfers. The C14 roof of the Nave is in 2 bays, in addition to the base of a
former bell-turret at the W end. The cambered central tiebeam supports an
octagonal crownpost with moulded base and capital and 4 straight rising braces
of square section. The E crownpost is plain, with one similar axial brace. The
roof is 7-canted, plastered to the soffit. At the W end the crownpost structure
is fully integrated with one portal frame of the contemporary bell-turret, which
has a cambered tiebeam and straight square braces. The equivalent W portal
frame has been altered to clear the tower-arch, mounted on a C19 high collar.
The early C16 W tower has diagonal buttresses to NW and SW, straight buttresses
to the 2 E corners, and stair turret in the angle between the N side and the NE
buttress. It is of red brick with blue headers in diaper patterns, of 3 stages,
with a moulded plinth and moulded strings at the floor of the bell-chamber and
at the base of the parapet. The parapet is crenellated, with the merlons
reduced. The tower-arch is plastered and has semi-octagonal responds with
moulded capitals and bases and a 4-centred arch of 2 chamfered orders. The W
window is of three 4-centred and transomed lights with tracery under a Tudor
head; the jambs, mullions, head and square label are moulded; the transom is
moulded, repaired with cement render. The second stage has in the S wall a
double-chamfered loop, and in the W wall a window of two 4-centred lights with
tracery, the jambs and mullions chamfered, with a Tudor head and moulded label.
The bell-chamber has in the S and W sides a window of 3 chamfered 4-centred
lights with tracery under a Tudor head with moulded label. The E window is
similar but the head is 4-centred. The N window is similar but of 2 lights with
a 4-centred head. The stair-turret is lit by plain chamfered loops, 2 to the E,
one to the N and 3 to the NW. It has doorways with chamfered 4-centred heads,
and the brick stairs are supported by a chamfered 4-centred arch at every
quarter-turn. The tower has 2 original floors with framed bellways, and an
original low-pitched roof with some C20 reinforcement. Fittings. The piscina
has a plain head, oak shelf and quatrefoiled drain. The C14 font of Purbeck
marbel is semi-octagonal, built against the S wall, 2 faces each having 2
shallow trefoil-headed panels, one having a shield and 2 having rosettes, with a
moulded underside. N of the tower-arch is an early C16 stoup with 4-centred
head and plastered bowl. In the floor of the S porch is a plain tapering
coffin-lid of Purbeck marble. There are fragmentary paintings on the S wall and
W wall, N of the tower-arch, and mutilated double brick niches on the N and S
walls, early C16. There are 3 bells, the first uninscribed but probably
pre-Reformation, the second by Thomas Gardiner of Sudbury, 1726, and the third
late C14, inscribed 'Vox Edwardii sonet in Aure Dei'. The bell-cage is original
or early, the transoms jointed with double tenons, with trenched saltire bracing
in all the vertical frames. P. Morant states that the N chapel was in use in
1609, when an alabaster monument to Stephen Beckingham was installed in it (The
History and Antiquities of Essex, 1768, I, 392).