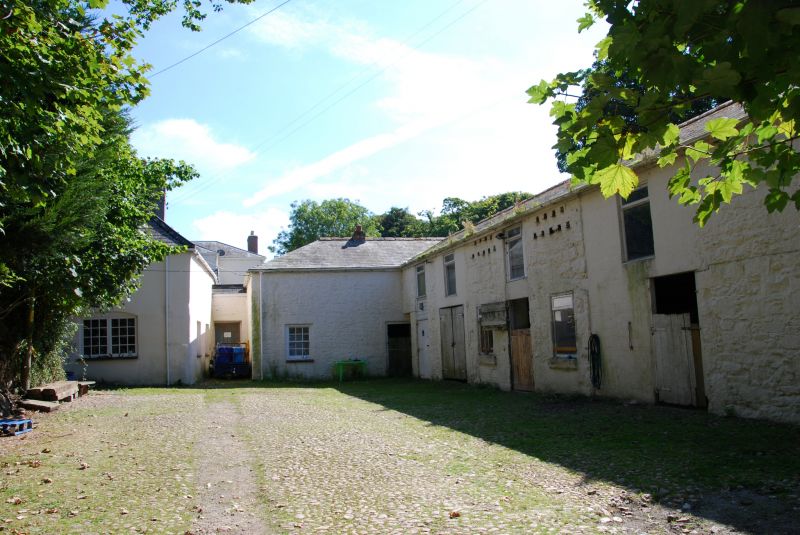 House. Probably C17, but much altered, and with early C19 addition;
alterations and restoration in progress at time of survey (1988). Mostly
rendered uncoursed rubble at ground floor and cob above, with addition of
sandstone ashlar, slate roofs (some slurried), brick chimneys. Irregular
rectangular plan with the earlier building on a north-south axis, a small
service wing to the rear at the north end and a single-depth early C19
addition across the south end. This, which is the principal facade, is 2
storeys and 3 bays, symmetrical, in simple Georgian style; the central
doorway has a small applied wooden architrave with fluted pilasters and a
pediment; the windows are 12-pane sashes with raised sills and splayed
voussoirs with keystones. Hipped roof of shallow pitch with projecting
eaves, side-wall chimneys. The earlier range to the rear has various
altered openings (and work in progress at time of survey).The service wing
to the rear of its north end is single-storeyed, with coupled 2-light sliding
sash windows in its north side and a thick chimney stack of brick at its
gable. Interior: this wing contains a very large rectangular fireplace with
massive left jamb and lintel of granite, probably C17; otherwise, altered.
History: was home of Captain Vivian, associate of Richard Trevithick.