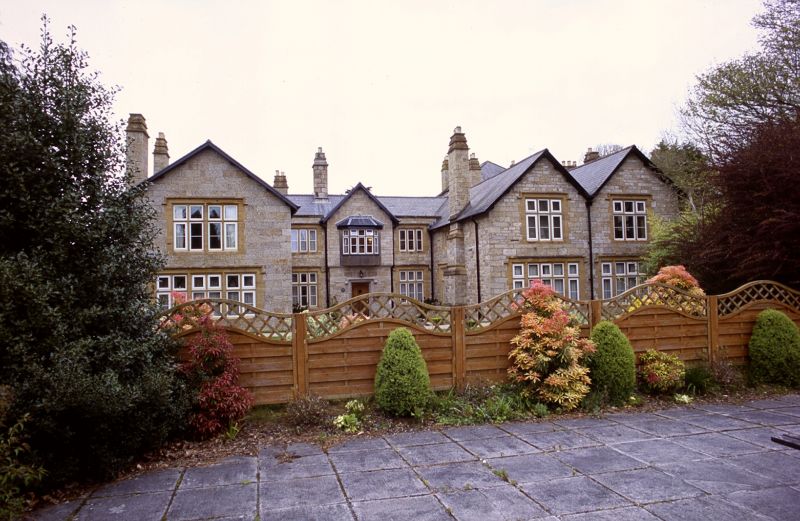 MADRON
SW 43 SE
7/88 Kenegie House
-
10.6.54
GV II
Country house. Circa late C16 or early C17, remodelled circa late C17 and circa
early C18 and greatly remodelled externally circa late C19 and slightly extended in
the C20. Granite ashlar and granite rubble with granite dressings plus Bath stone
dressings to C19 features. Grouted gabled scantle slate roofs. Dressed granite
axial and lateral stacks mostly C19 but axial stack, right of middle is probably C17.
Plan: Large irregular plan. Original range in main axis with right of central C16 or
C17 2-storey porches at front and rear of original through passage position.
Probably originally a 3-room and through passage plan with hall left of the through
passage. Extended with wings at either end a right angles to rear C17 and C18.
Circa late C17 or early C18 a bow window was fitted to the front of the hall. Circa
late C18 a wing was added or rebuilt at right angles to front, left. In the C19 the
back of the house as remodelled to make a new front, the spaces beside the porch were
filled, the rear left hand wing was remodelled to make a pair of wings and a service
wing including a servants hall was built in front of the front left-hand wing. 2
storeys.
Exterior: 2 storeys. Irregular elevations, original north front, principal C19 front
(south) C18 garden front (north) and entrance also to west. Principal features are
the C16 or C17 porches at front and rear and the remarkable bow window left of the
front porch. The wing at right angles to the front left has a partly C18 front with
flat arches over the original openings and some old sashes. Otherwise although
retaining much C18 and earlier masonry, the features of the house are predominantly
Victorian with many transommed mullioned windows in a late Elizabethan style.
The circa late C16 or early C17 porches have their original doorways. The front
porch doorway has a basket arch and hoodmould over. The inner doorway is pointed.
The first floor of each porch is carried on a moulded cornice. The hall window is a
6-light bow window with widely spaced mullions with a moulded granite cornice over.
The bowed casements are original (circa late C17 or early C18) with small panes of
crown glass and wide ovolo moulded glazing bars. In front of the window is a low C18
wall with a cambered coping.
Interior: Much of the ground floor has C19 or C20 detail. The right hand room has a
C17 chamfered granite fireplace with jointed lintel. The hall has C18 panelling and
moulded ceiling cornices. On the first floor most of the rooms contain circa late
C17 or C18 features including bolection-moulded and other panelling, moulded plaster
ceilings, many of them deeply coved, and with various enrichments including some with
modillioned cornices. A principal axial passage with coved ceiling is now within 2
or more chambers. Circa 1700 stair with panelled newels. The stair hall has a mid-
floor entrance from a terraced garden at the left hand side of the house (shown as an
east garden front with piano-nobile first floor in a circa 1770 drawing by William
Borlase).
Kenegie has been the home of many notable Cornish families including: Tripconie in
the C16, Harris in the C17 and C18 and once the home of the Arundel family (the lions
at Trerice, qv came originally from here).
Formerly one of the great Cornish houses, rather altered in the C19 but retaining
much fine quality detail of the C16-C18 centuries.