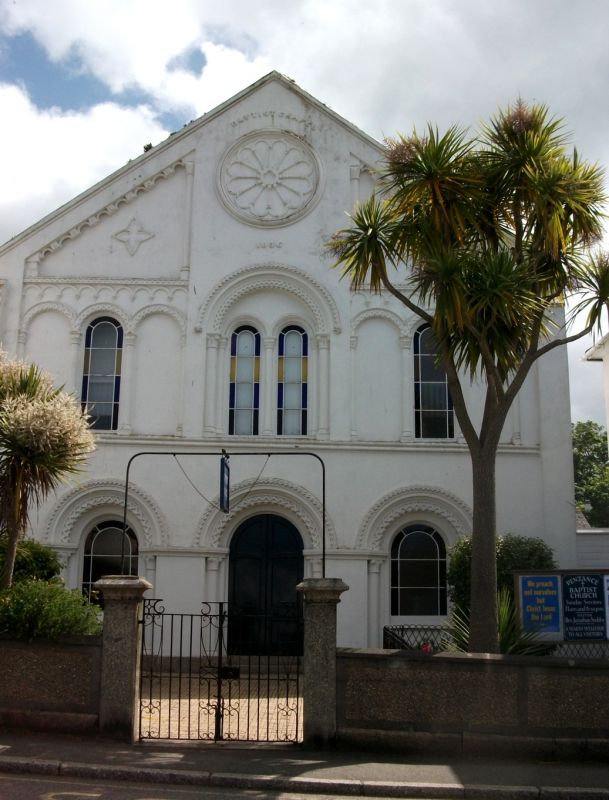 Baptist church. 1836 by Philip Sambell, Schoolroom probably mid C19, chapel slightly remodelled 1898-1905.
MATERIALS: stuccoed front with stucco detail, otherwise local rubble with granite dressings; concrete tile roofs; brick stack at right-hand end of schoolroom.
PLAN: rectangular aisle-less plan with gallery to 3 sides; original bowed apse now party wall with schoolroom at rear.
EXTERIOR: 2-storey elevations; symmmetrical 3-bay road front with fine Romanesque style detail with round-arched moulded or moulded and carved openings. The moulded gable resembles a pediment but with recessed spandrels flanking a central bay with blind rose window. Above the rose window is the relief inscription: BAPTIST CHAPEL, and below is the date 1836. Below the rose window is a 2-light window under a carved hoodmould; 2 orders of nook shafts and similar central mullion. The flanking bays have spandrels with carved bracketed cornices, and nook shafts, over carved friezes and arcaded cornices above triple lights with sidelights blind. Moulded sill string. Ground floor has carved hoodmoulds on impost string and carved arches on nook shafts to central doorway and flanking single-light windows. Windows have margin panes; pair of 3-panel doors. Side walls have original (except for one C20 copy) tall round-arched sashes with spoked fanlight heads and there are rubble relieving arches under the sills. Schoolroom has 3-window range to rear elevation with original 12-pane hornless sashes to 1st floor.
INTERIOR is of considerable interest and retains most of its original features including: gallery with moulded cornice and arcaded front carried on brackets with pendants, each bay punctuated by paired pilasters over paired brackets. The gallery beams are supported on slender columns with Romanesque capitals. The plaster ceiling has a moulded cornice and a central arcaded rose. At the original ritual east end is the original Romanesque tripartite window (blocked since the addition of the schoolroom) with chevron detail to the round arches and with the painted inscription "ONE LORD, ONE FAITH, ONE BAPTISM" to the tympanum over the 2 central lights. The entrance area has its original panelling and the staircases have octagonal newels.
FITTINGS: very fine and rare original arcaded rostrum with bowed centre and flanking turned balustrades. At either side is a straight flight of stairs with stick balustrades which flank a large tiled bath with steps down to enable complete immersion in the baptismal water. There is a communion rail in front and 5 chairs, the central chair with arms. Original high-backed panelled benches with renewed graining survive at the back of the gallery. There are C20 cinema type seats on the original steps in front and the late C19 pews to the ground floor are pitch-pine with shaped ends. There is a panelled and piped organ at the west end of the gallery.
Exciting use of the Romanesque style by the deaf Truro architect Philip Sambell. Other good chapels by him, also listed, are in Union Place and River Street, Truro, and Wendron Street in Helston (also Romanesque). This chapel is particularly fine and the survival of good original internal features further enhances its interest. It has national historic interest as one of the first examples of a style which became very popular in the 1840s.