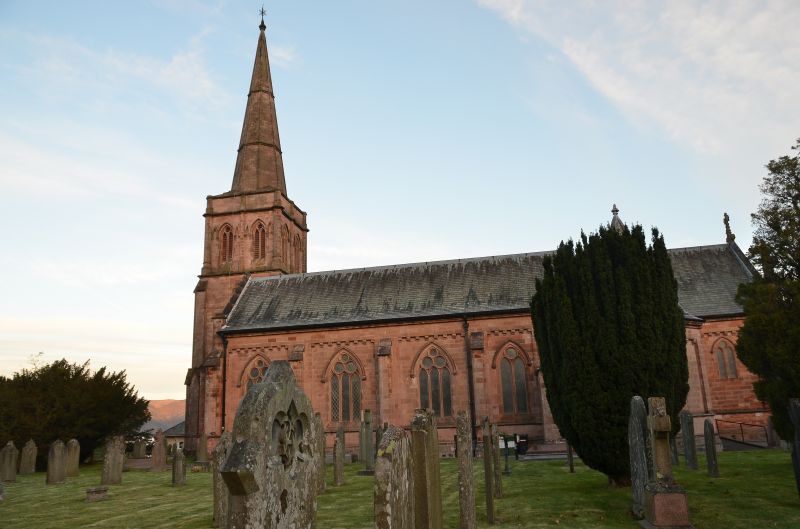 EXTERIOR: Church in geometrical style, the original nave north and south walls and windows re-used for the later aisles. It has a moulded plinth, coped gables and swept eaves throughout. Nave and chancel have pinnacles on the angles. The 3-stage tower, with parapet stone spire, has angle buttresses in the lower stages, with gabled offsets, and polygonal north-east turret. The west doorway has 2 orders of shafts, and double doors with original studs. In the second stage is a 4-light west window below a round clock in a square frame. The bell stage is narrower and has octagonal clasping buttresses and central shafts that are carried up to the parapet as if to be crowned by pinnacles. The bell stage has two 2-light openings with louvres, with outer narrower hood moulds to suggest blank arcading. Buttressed aisles, 4-bay south and 5-bay north, are under separate roofs. Three-light and 2-light windows are in recessed panels below corbel tables. Below the south-aisle east window is a shallow porch with segmental-headed doorway. The north porch, a clumsy addition probably of 1889, is gabled in line with the aisle, and has a segmental-headed east doorway. The chancel has three stepped 2-light east windows with shafts. It also has 2-light and 3-light north and south windows, the north re-set, the south-east window shorter and clearly added in 1889. The octagonal vestry has lancet windows and its own west porch.

INTERIOR: Nave and chancel are wide and there is no structural break between them. Four-bay arcades have round piers and double-chamfered arches. The tall tower arch has 2 orders of shafts, partially enclosed and including a gallery front of blind arcading. Nave and chancel have closed polygonal wagon roofs, which in the nave stand on corbelled shafts, and in the chancel on corbels. The break between nave and chancel is defined by an arched-brace truss on angel corbels. Ribs are painted and decorated with stencilled foliage. Aisles have arched brace roofs on corbelled brackets and notional hammerbeams. In the chancel, north and south windows have rere arches with central colonnettes and geometrical tracery, and piscina and sedilia have cusped arches, making a fine display with the windows.

PRINCIPAL FIXTURES: The round pulpit and square font, each with blind arcading, are to Salvin's design. 1930s nave benches have plain square ends. Choir stalls have square-headed Gothic-panelled ends and frontal. The arcaded communion rail is probably also by Salvin. In the chancel are 2 similar Gothic wall monuments of tripartite blind arcing, to John Marshall (d 1836 and the founder the church), and Frederic Myers (d 1851). Chancel windows (1888 -89) were designed by Henry Holiday (1839-1927) while he was still designer for Powell's, and are among his best work. Other windows include a `suffer little children' window (c1923) in the south aisle by Veronica Whall and one by Christine Boyce (1990).

HISTORY: Built in 1838 by Anthony Salvin (1799-1881), architect of London. Salvin was a significant figure in the late-Georgian and early-Victorian Gothic Revival. He set up in independent practice in 1828 and soon showed his ability to create buildings in an impressively authentic medieval style. He is also well known for a range of country house work. The patron of St John's church was John Marshall, owner of a Leeds flax mill, who had purchased Castlerigg Manor in 1832 but who died before the church was completed. His descendants continued to patronise the church, adding aisles in 1862 and 1882, and lengthening the chancel by one bay in 1888-89, the latter to the designs of William Marshall, an architect member of the family.

REASONS FOR DESIGNATION: The Church of St John, St John's Street, is designated at Grade II* for the following principal reasons:
* The church is a picturesque design with a commanding tower and spire. It retains a unity of architectural style despite being the work of several phases, and is a good example of the work of Anthony Salvin in being a convincing Gothic building without adopting a rigorously archaeological approach.
* The church is carefully sited away from the town centre, on a low eminence that makes it a conspicuous landmark, and aligned so that its ritual west doorway opens to a spectacular scenic view of distant mountains.
* The interior retains original fittings by Salvin and other fittings that complement the original design.
* It has glass by Henry Holiday, one of the leading stained-glass makers of the late C19 and early C20, which has been described as among his best work.