A Grade I Listed Building in Greystoke, Cumbria 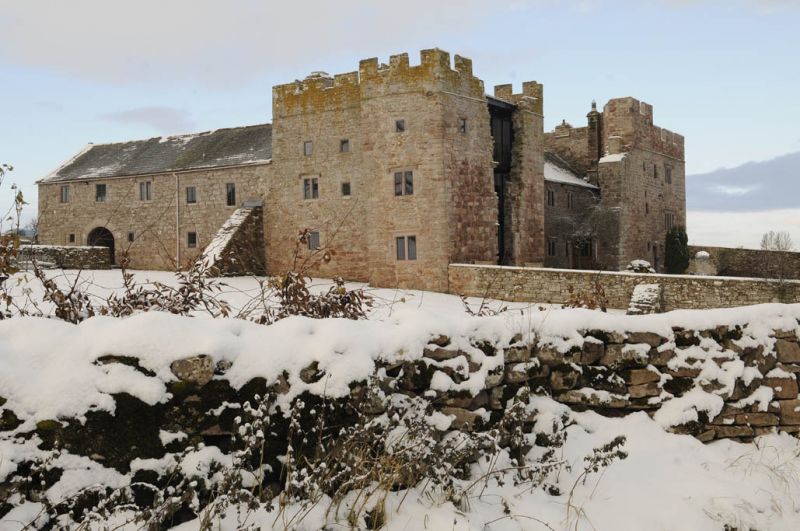 Fortified house with gatehouse wing. Probably late C15 with 1590 alterations
and additions; further C20 alterations. Thick walls of large blocks of pink
sandstone rubble, the towers with battlemented parapets and stone spouts. Hall
and gatehouse wing have graduated greenslate roofs with banded red sandstone
chimney stacks. 2-storey, 4-bay hall with flanking rectangular 3-storey,
single-bay towers, the left tower extending to rear as a 2-storey, 5-bay
gatehouse wing, forming overall H-shape. The front wall of the hall has been
completely rebuilt, probably in 1590, being moved back about 2 metres; part of
the original front wall remains as a buttress in return angle of left tower and
the original roof line can be traced on this tower wall. 2-light
stone-mullioned windows under hoodmoulds, the right windows blocked on
ground floor, to accommodate a C19 porch, and partly blocked above. Right tower
thought to be older, perhaps confirmed by angle turret containing newel
staircase, common to the tower and the hall before its rebuilding. The turret
shares front wall with the tower and has a stone-surround doorway and small
irregular chamfered openings on 4 levels. The front wall continues beyond the
turret as a buttress, perhaps added, since it cuts light to hall windows.
Between this buttress and the present hall front, an upper-floor opening from
the newel stair would have led into the hall. Front wall also has a small
ground-floor casement window under a 4-light stone-mullioned window with
hoodmould and large relieving arch; 2nd-floor similar 3-light window.
Battlements partly removed in C20. Right return wall and rear of this tower
have 2- and 3-light stone-mullioned windows, some partly blocked, all under
hoodmoulds, one insertion inscribed M.H. 1918 (Howard); some label stops are
carved heads, others are inscribed H.B. (Henry Blencow). Left return wall, at
junction with the rear of the hall, has a squint window avoiding the hall. Left
tower also has a turret, with shared front wall, but without a stair. Front
wall rent from ground-floor window to hattlements, but battlements otherwise
complete. The turret projects on left return wall, otherwise common with
gatehouse wing, which has 2-light stone-mullioned windows, one with hoodmould
stops inscribed H.B. and left segmental-arched passage. Thick rear hall wall
has Tudor-arched doorway with lintel inscribed in Latin and HENRY BLENCOW 1590,
under an armorial panel, initialled H.B. or R.B. Various stone-mullioned
windows and smaller openings, with earlier blocked windows. Rear wall of
gatehouse wing has Tudor-arched doorways, one initialled H.B. External stone
steps to C18 loft doorway. Interior of hall has Tudor-arched stone doorways
throughout. A large C16 stone-arched fireplace in the kitchen. The present C19
staircase has earlier timber-framed partitions. Fireplaces and doorways in the
towers on various levels, but both are derelict without roofs and floors.
Interior of gatehouse wing has a smaller C16 stone-arched fireplace. See M.W.
Taylor, Old Manorial Halls of Westmorland & Cumberland, 1892, pp.288-294.